And btw, the 2nd route English patch for G senjou no Maoh should be out sometime next week, so keep a close eye out for it. And yes I’m promoting it. >.>; 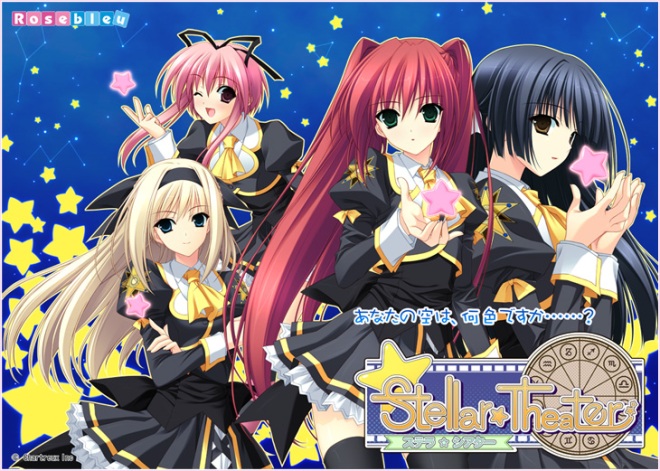 Well I gotta admit, I expected this to be much much better with the staff. I’ll go over the details in the review. For now, let me drown in Sapporo and listen to magnet some more =3.

Rosebleu. It’s a new company. No idea if it’s just another sister company off some big name. Seems to me they know how to choose their staff. I will still keep my eye on them even though the first product was totally different from my expectations.

So yes. Where was I. Oh right, you start off as Tachibana Daichi, a supposedly normal guy. And yes he’s pressing against a girl because of a crowded train (chances of this happening IRL is near 0).

Anyway, when they reached the station they apologised to each other and went their seperate ways. Well at least that’s what was supposed to happen.

As you can see, a loli girl wearing some weird clothes and carrying an axe stops him and tells him to raise his arms. She told him she’s one of the constellations, Leo (In this world, they have people representing the constellations. Obviously they have powers)  Then, she asks if he is Tachibana Daichi. After confirming that he is Daichi, she walks away.

Just what is happening?

Now, I don’t have anything extremely bad to say about this eroge. Just that the story is really plain.

Yes sure, there’s the fantasy elements that are supposedly to spice up the eroge and funny parts, but still, it’s ridiculously average. The climax just comes and goes, buildup was not very well done and story is a little patchy TBH.

Also, there are too little routes. We have 4 routes. There are a LOT of cute girls being introduced in the eroge. I mean a lot. Most of my favourites (Miru, Hokuto and Hiyama) didn’t get a route. Which is absolute rubbish. If you’re going to introduce such a lot of cute characters, at the very least make a route for them -_-;

Oh and about the funny parts, it’s not done badly but rather it’s overdone. You don’t really feel it’s funny after the 20th time. It lacks……………… something. 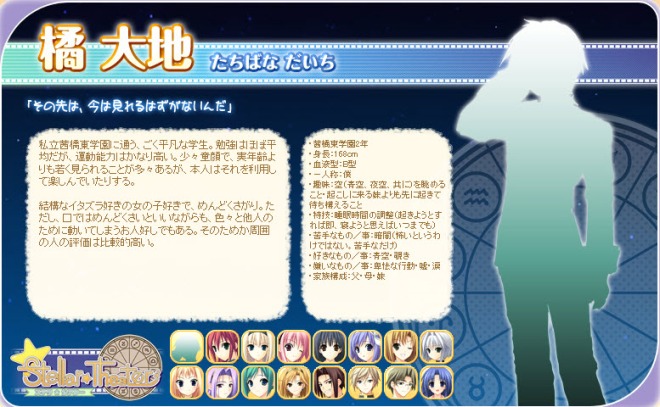 Your uhh extremely perverted protagonist type. Even though he’s lazy and have average grades, everyone likes him because he’s uhhh kind. Still, he can totally compare breast sizes in front of the girl or observe a girl’s pantsu without turning away. Lol.

Only gettable loli in the eroge. She’s supposedly missing for 5 years and appeared suddenly in front of Daichi one day. She always takes a cold attitude towards Daichi even though they were very good childhood friends last time. Oh and she’s one of the constellation candidates. I think you can consider her a tsundere. Though her tsun side breaks pretty easily. Lawl. 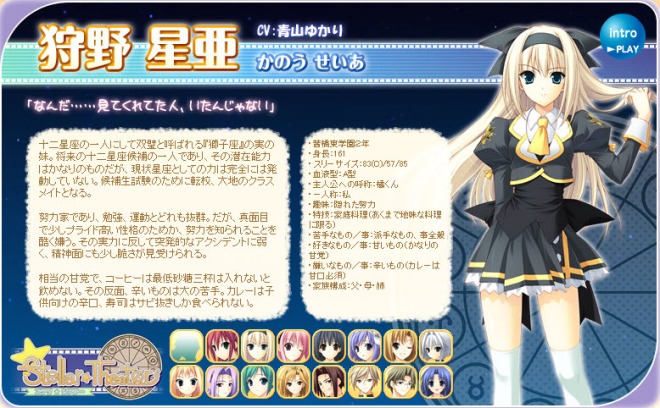 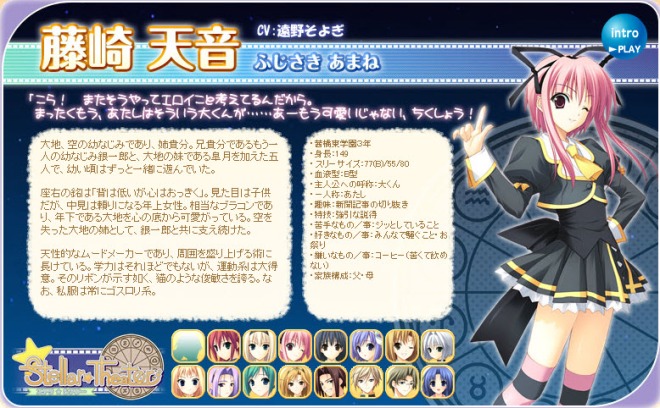 Daichi’s childhood friend. Older than him by one year, so he calls her Ama-nee .She is pretty short though. And she usually wears specs. She treats Daichi as her cute brother. But sometimes She’s extremely dere dere towards Daichi. She does have a serious side. She’s pretty flat actually. XD. 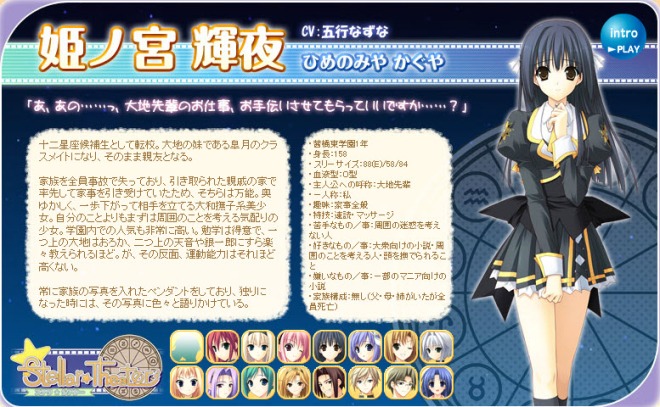 Biggest assets in the eroge. Kind and silent character. Probably the most normal character in the eroge. Constellation candidate. She lost all her family members in an accident. Kind of a loner. She is very cute though. She has a strong wish hidden in her intentions of being a constellation.

Ok. Finally. I’ve managed to reach here without giving up. Sapporo is such a great help. 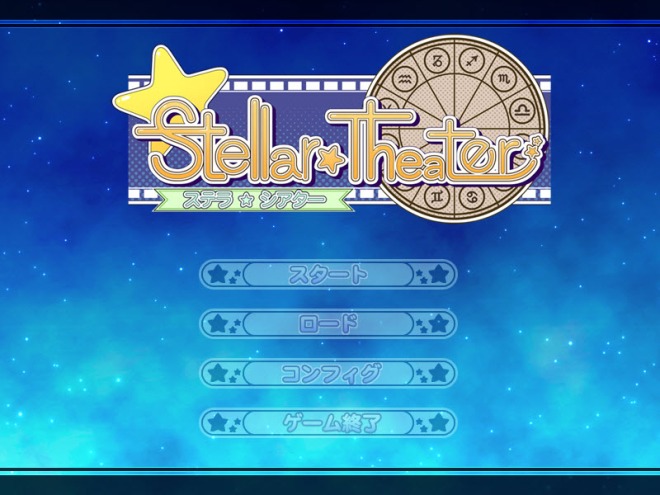 More options will come up after you complete the eroge. Btw, if you finished all 4 routes, a new option will pop up called stellar theater. Click that to get the wrap up story and the last few cgs.

Config had the usual stuff. Nothing spectacular here. 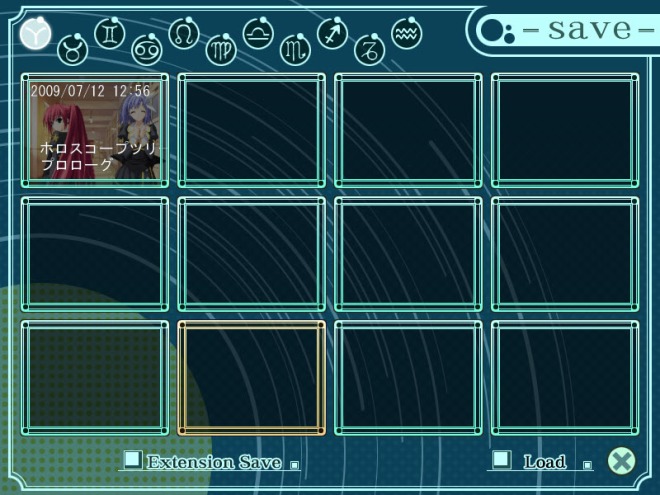 So save screen. Nothing extremely special here. If anything, they have that extention save option which allows you to save a save file to a destination if you exceed the save amount. Which is highly unlikely considering this has like 132 save slots.

Text is non obstructive with a small text box. Simple and effective design.

Right clicking twice would bring you to the menu with all the options you need. If you’re wondering what keyword or horoscope tree is, I’ll get to that in a short while.

This, is probably the worst backlog I’ve ever seen in my life. Not the design, but how it moves. The small gaps between the edges of the screen and the text box is meant for the character pictures. Problem is that when you scroll up and down, the text doesn’t go down in a straight line. That means, for example, the top left text that you see here would move to the one below and it would shift to the right. Same with the others. It is extremely confusing to the mind. Terrible backlog. 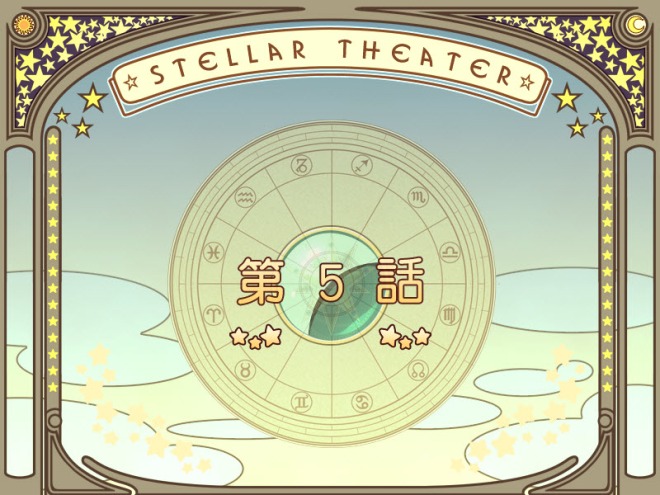 The whole eroge is seperated into chapters. Of course, there are dates too, but they aren’t important. In any case, the ending chapter is the 6th chapter, so you can gauge how far you are into the story.

This, is the horoscope tree system. It’s kind of like a matching game. You pick up keywords throughout the story and you use those keywords to reveal what happened that that place. Hints are given and it’s usually pretty obvious. Even if you made a mistake, you can still try again so no biggy. 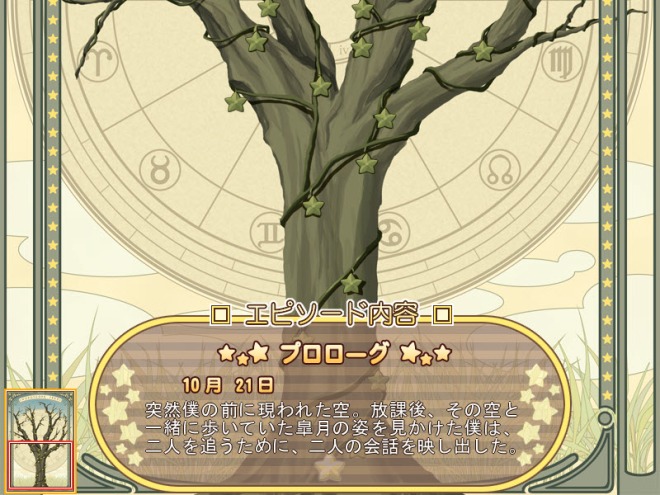 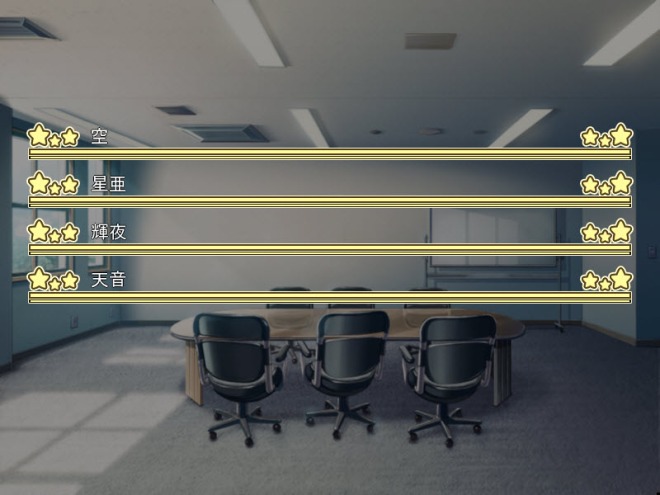 This game has a few different kinds of choices. One is the classic type where you just choose whichever you think is right. 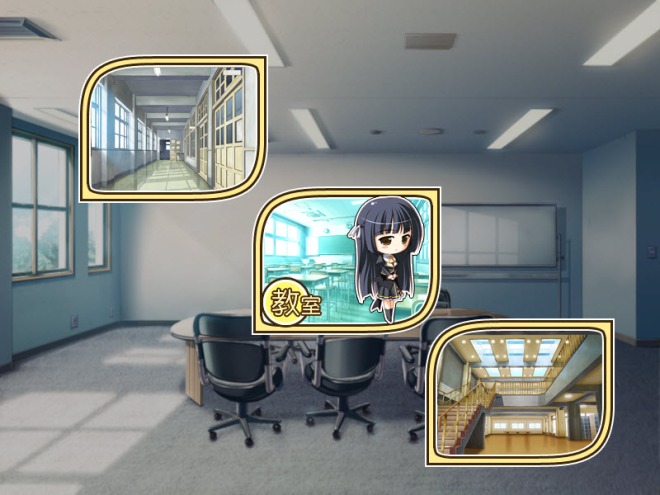 This, choose where you go. Still, it’s usually used when you’re investigating so it shouldn’t make a big difference in your route. But it does let you pick up crucial keywords. 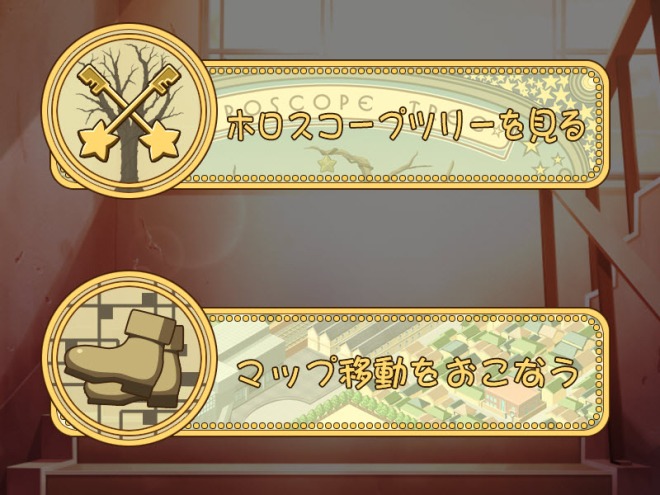 This pops up sometimes when you go to a location. It’s best if you are sure about having all your keywords and you’re in the right location before choosing the horoscope tree.

First things first. The art isn’t bad for this eroge. You can obviously expect quality from Yosuga no Sora’s artist. Still, some of the shots lacked details. Walls were a little plain and the gradient takes up too much space. A little too simple for my tastes.

Anyway, no animation here. Nothing that I would count as actual animation anyway.

Music is pretty typical. Nothing that blows you off your feet but nothing that makes you sleep either. There is quite a lot of tracks though.

Around 4 h scenes for each character (3 for kaguya). Pretty well done, but they were all cramped in one chapter and well…. it’s the same as every other eroge. They have sex just for the sex scenes and not because the sex scenes contribute to the story. Maybe I should stop hoping for someone to actually make MEANINGFUL h scenes. 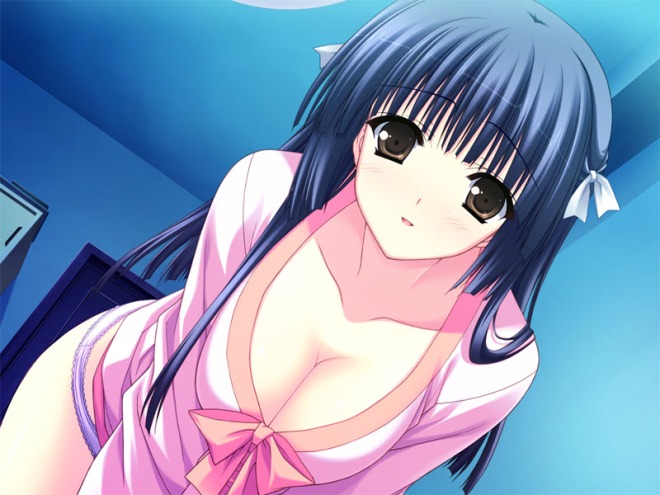 So yeah……………………………. I gotta say, with such an elite staff I have no idea what went wrong while they were making this eroge. It’s terribly mediocre.

Of course, I’m not saying it’s downright bad, but you could probably spend your time better elsewhere. It’s got nothing fancy, no huge climax, no true route, no big secret and nothing that will make you go wow.