And here I thought this eroge would just be a little better than the usual eroges. I WAS SO WRONG.

I feel like crying again…. This eroge… or should I say nakige…

What’s so special = A very solid and sad plot, Cute characters, Somewhat slice of life, really nice art (I think the plot is already enough to make anyone play)

I can’t stop. Even though it’s been 2 hours since I finished the eroge, I can’t stop thinking about it and how well it was written. It had epic moments that could rival G senjou no Maoh’s ending. That says a lot since I never really found any competition with it. GOD imma mop in the cornerx now.

I will not spoil any part of this because it’s epic right off the bat. I’ll recommend you not to read anything, even the introduction from getchu, to enjoy this eroge to the fullest. It’s that epic.

Of course, there must be a reason why I’m so hung up about this eroge. So we’ll go through that instead.

This eroge, has a lot of great moments. Unlike most eroges which usually only has one and the others are all fanservice fillers, this is almost 80% solid plot with a few fanservice stuff along the way. It doesn’t bore you in other words. Even the repetitive scenes were awesome. For example this scene here. I felt like crying all 5 times I ran through this scene. Which means something.

Not to mention, it’s fantasy is incorporated very well in the slice of life atmosphere of the eroge. I didn’t feel doubt when they pushed out the fantasy setting nor did they overdo it (As with FSN where everyone had the power to destroy a city). It went at a very slice of life and school life romance type of feeling to it, but it is tons more interesting than just any school life eroge. That, I can say without a doubt.

It has, a much more serious and romantic feeling to it than most eroges being produced nowadays. Of course, it has it’s funny moments when Akiho pouts and everything, but still, the gem of this eroge is in the solid plot. You won’t get bored with this. Well unless you have no patience for slice of life at all.

Prepare a box or tissues before you play because this eroge makes you cry. Ok maybe it’s not that bad, but it makes you pretty damned SAD. LIKE ME. T.T

I recommend you play Chihaya at the 2nd last and Akiho for the final route. That way, the story would unfold nicely. And yes I don’t understand why Iincho didn’t have an actual route.

The protagonist for this eroge. Well he’s one of those template protagonists you see in most eroges. Kind to practically everyone. A little weak. Kinda thing. This one is apparently a very clever guy though. Unlike most of the other protagonists. Lives together with his old man at first because his mother died when he was young.

She’s one of the two sisters who live with Kazuki from young. She’s energetic, cute and pretty damned wilful. She’s a little obstinate too. Same age as Kazuki and is in the same class as him. Also, she’s one heck of a clever girl too. Cares for her sister a lot and thinks about things more than she looks. She’s Kazuki’s girlfriend.

The younger sister of the two. She’s almost like the opposite image of her sister. Timid and more….. how do I say it… more soft spoken? She’s still a pretty bright and cheerful character though. Anyway, she is a little slower than her sister, so her marks are rather average. Her cooking skills too are a little………………… dangerous? Calls Kazuki Oniichan and habours feelings for him, but since Akiho, her only blood relative, is his girlfriend, she stays quiet about it.

Miko. And Tsubasa’s friend. Or should I say she loves Tsubasa. Anyway, a very strong headed (and very strong too) girl who hates being close to guys…… well close to people in general. Especially against Kazuki since Tsubasa likes him. Her job, besides studying, is to destroy ghosts. You’ll see a very cute side of her if you get to her route \o/. Oh and, she is my favourtie character =3

A mysterious girl that appeared out of nowhere. She’s a Jinx/God of….. something to do with sicknesses. Anyway, she’s not human. Since she can only bring harm to others, she stays away from people. Still, she’s pretty lonely. She seems to have reasons showing up in front of Kazuki and Akiho……

Title screen. You get the CG mode right off the bat. Also, after you complete a route, characters will start to appear in the Title screen. I love Chihaya’s expression there.

I like the save screen. Quite a lot of options. Don’t think you’ll get to use all the slots though, not that many choices.

Text box is unobstructive and words were very easy to read. They also had the shortcut keys like s for save and l for load. 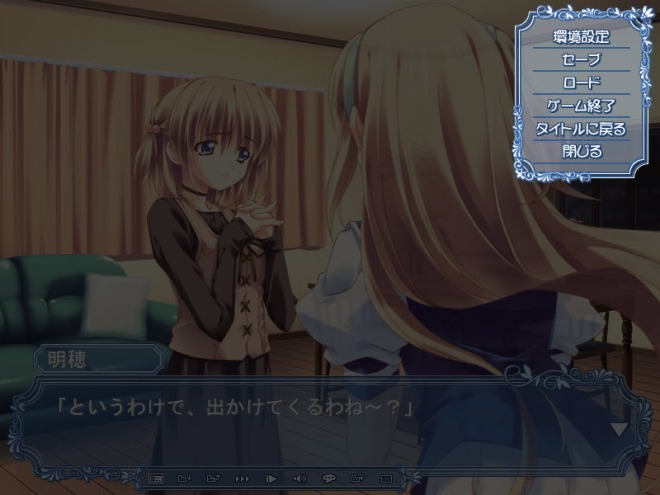 Right clicking would bring this up. It has all the options you’ll use. I rather use shortcut keys though.

This screen is what comes first on every new day. Of course, they tell you who is probably going to be in the center of the current chapter. Pretty obvious who is going to be the main in this chapter. 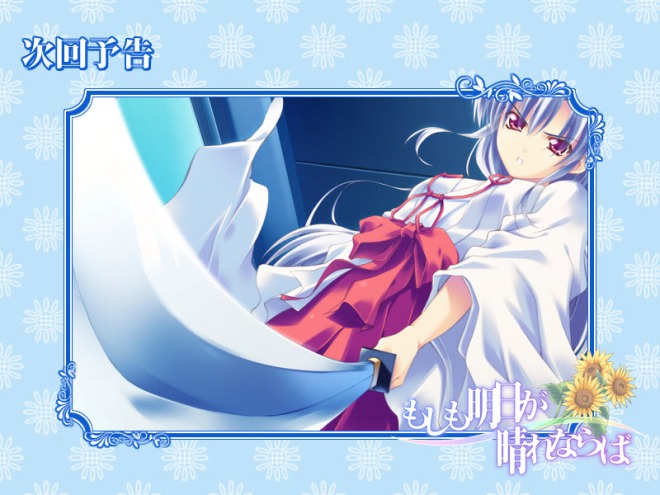 This, I found to be pretty funny. It’s a preview of what’s going to be in the next chapter. I thought they only did this in animes. Turns out I was wrong. Lawl. They have really funny voiceovers for these too.

Of course, one other thing is that the art is totally fabulous. The backgrounds are wonderfully colored and the shading for the characters is soft. No use of extremely contrasty colors like bright red or blue as with most others, but rather earthy colors. Very peaceful graphics.

This artist never cease to amaze me.

Nothing to be considered actual animation in this eroge. 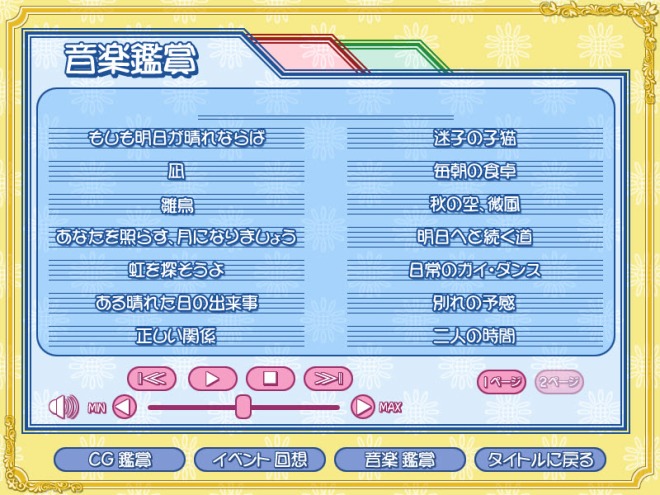 Music mode. This eroge has a very very fitting soundtrack with some music that is just amazing. The song though, was the main reason the music for this eroge is so epic. The timing it comes out in the eroge is just at the right time. I’ll be searching for the OST. Definately.

Not many H scenes in this eroge really. in terms of events there are 3. But one of the events for every character is not exactly….. well anyway. I enjoyed the H scenes as some of them at the very least had some meaning (Chihaya) which didn’t make it just another please f me because you need to kinda thing. VA and stuff was done pretty well.

I didn’t expect Tamami to be…. that active though. She’s just too cute =3.

What else can I say? If you haven’t played this, PLAY IT. It’s one of the best Nakige’s I’ve played in a long long time. It has quality, awesomely cute girls and a gripping plot. Whatcha waiting for?