Not exactly my type of eroge I guess.

What’s so special = Nice art, a lot of action packed scenes, Wakamoto as a muscleman in loincloth (at the start only)

This eroge doesn’t exactly have everything that I expected it to have. As they were a section off Akatsuki works, I must say I expected quite a bit more than just this.

In this world, there are people with special abilities. Behind the face of normal human lives, people fight. Be it creatures from the dead, other humans or even creatures between themselves. That always happens, but the balance of the world is always maintained. This time, things are not going so smoothly.

One man, together with three of his subordinates rise up from the dead. They seek destruction and control over the entire world. The four undead beings that cannot be killed now wages war against the world, starting from Japan.

Their key is the shrine maiden, the only one left of her kind.

Yes that’s a short prologue since the prologue doesn’t even matter after a bit.

The whole plot is divided into 4 routes with an additional side story (rindou). I swear Rindou’s route was just an excuse for H scenes. It was pretty much pointless except from that.

The good points of this story is the theme. You get to see lots of well done action scenes that does somewhat pump you up for a much more exciting ride. The characters interact with each other pretty naturally and react in an acceptable manner.

If a good fighting eroge was what you wanted, this definitely fits the bill. It has lots of it.

They too didn’t mind putting some gore into the story. Which is pretty decent since an eroge filled with fights should have blood if you go by common sense.

I somewhat liked the variation of weapons and slight differences in storyline between the routes but found them all to be rather bland since it ended all the time on boss kills. Which means there isn’t really much of what you would call a surprise. It’s all really straightforward.

But, for the bad points, the pacing isn’t very good. Some of the endings were pretty much a bombshell, with the kind of “Let’s go kill the boss!”. Boss dies. Story end. Of course, they were “intelligent” to put even more bosses after that, repeating the process and prolonging the time before the end. Some events were way too sudden and it’s more of a WTF factor than a surprise factor. The skills too, some of them were pretty >_>;. I mean sure, if you had that skill why don’t you just USE IT.

Even though I said Wakamoto was one of the fun points of the eroge, that just because it’s him. To be perfectly honest, his voice is a far cry from what the character’s personality is. I mean, yeah I enjoy wakamoto’s voice, but it just doesn’t fit with kongousai. It just doesn’t. It sounds more like a joke when the line is supposed to be serious.

Another point would be how I really, really don’t like reviving protags. I mean sure, the protag dies. I can live with that. But I can’t live with him reviving 5 minutes later. So what’s the point of him dying anyway. The reason why protags dying is interesting is because of how the heroine reacts after that, not because they can revive after that and come over to save the day. Maybe they wanted to have good endings throughout…

Meh, found this eroge’s plot to be a little awkward. It’s not bad, but there are some points there is this feeling of…… inappropriateness. As though the plot moved somewhere it shouldn’t too soon. I did like the fights, but that isn’t really enough to make me say that the plot is worth reading.

The protag. He’s in the Rokuhara (One of the three main organizations for people with special powers) secret intelligence team. Not a fight orientated guy. He’s a fast food junkie coupled with a can coffee addiction. Doesn’t believe in the concept or friends or partners but he detests the idea of betrayal. Still a pretty kind guy inside even though his words aren’t kind most of the time. 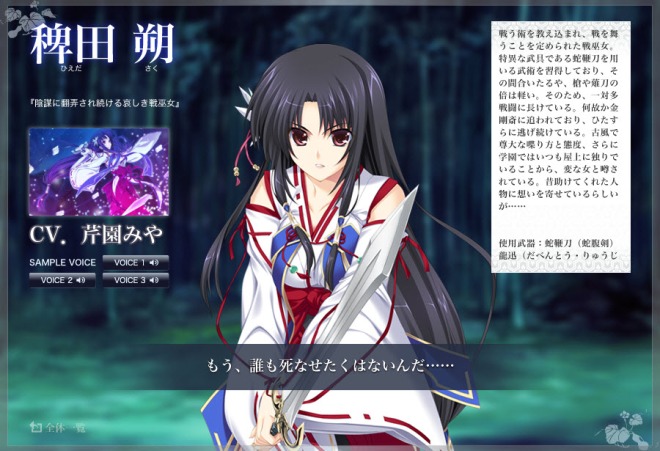 The shrine maiden that’s being chased. She’s a mysterious girl who, even though she’s in the same school and class as Misoka, seldom comes to class and instead hangs around on the rooftop. She speaks in a pretty traditional/olden way. She can hold herself pretty well in battle, with her extendable sword. Somewhat slow on the uptake.

Azami is a ninja. She ran away from Rokuhara and joined the Onmyoryou. Her skills as a ninja are exceptional and can hold herself well against most people. A pretty normal girl in terms of personality, but she’s somewhat timid. When a promise is made, she’ll definitely go by it.

The idiot simple girl in the story. She gets bullied by Misoka all the time because she falls asleep on long discussions and has the o.o? expression on her face. She get really serious in fights though. She uses a spear. 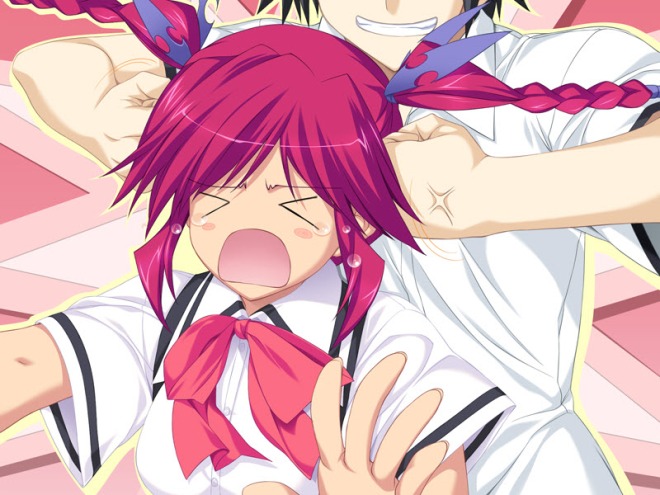 She falls for the same tricks quite a lot

She’s an exorcist from the Church (The last of the big special power organisations). The Church is usually stationed in countries other than Japan but this time they sent Lailah in. She’s a friendly character who mixes japanese and french together in her words sometimes. Lives alone in a hotel. Also holds the biggest bust in the game. She uses a scythe and has quite some destructive abilities.

Rindou is another ninja. She’s Azumi’s cousin. She works for Rokuhara under her master Tsuzuki who is the head of the special public welfare department, the one chasing after Kongousai. She’s very talented as a ninja, almost second to none. She’s somewhat strict but kind at the same time. I swear the extra route was an excuse to have her H scenes.

Her running speed is even faster than a horse >_>; 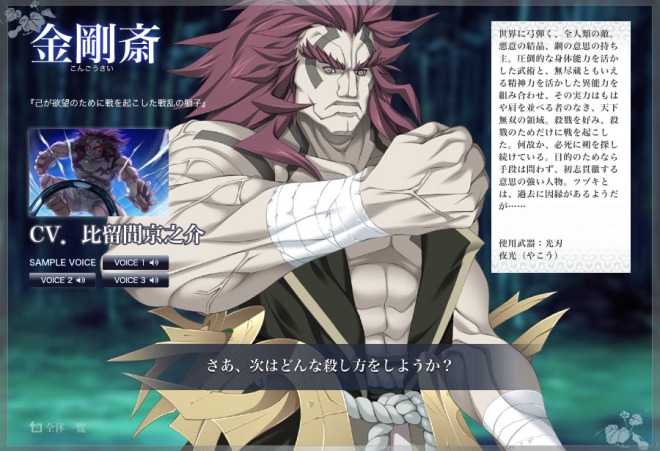 The “leader” of the 4 undeads. He loves fighting and is searching for Saku for some reason. His abilities + his undead status makes him one of the strongest characters alive on the planet. He would do anything for his goal. That and he’s voiced by Wakamoto.

Title menu. Changes when you finish all 4 routes. Nothing too special over here.

Config menu. All the usual options. I do like the painted design of the edges though. Roughens things up a little.

The text box is a semi transparent (changeable) solid right at the bottom of the screen. This is probably as unobstructive as a text box can get seeing as how low it is. Unfortunately, you can’t get rid of the box while you could get rid of the text for some reason. I don’t need the damned black bar at the bottom when I wanna see the CG >_>;. Also, this only happens on event CGs, on normal situations, the top and bottom would be total blackness, kind of a widescreen situation where words appear at the bottom. 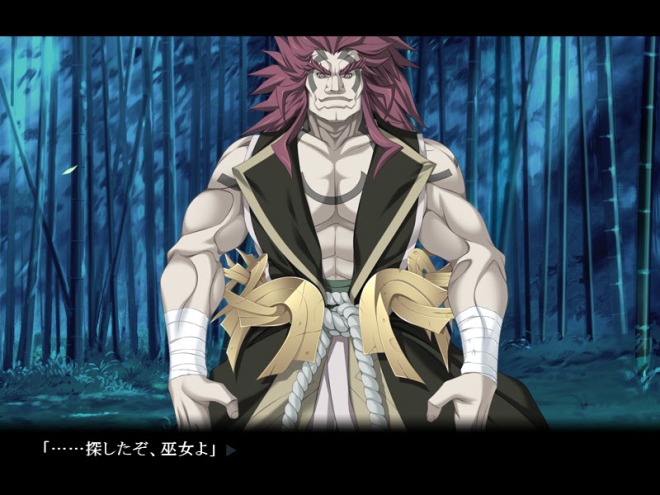 Right clicking would bring up these options. If you noticed, there are absolutely no buttons at all on the text box, which means to save or load you HAVE to open this window before going to the save mode. 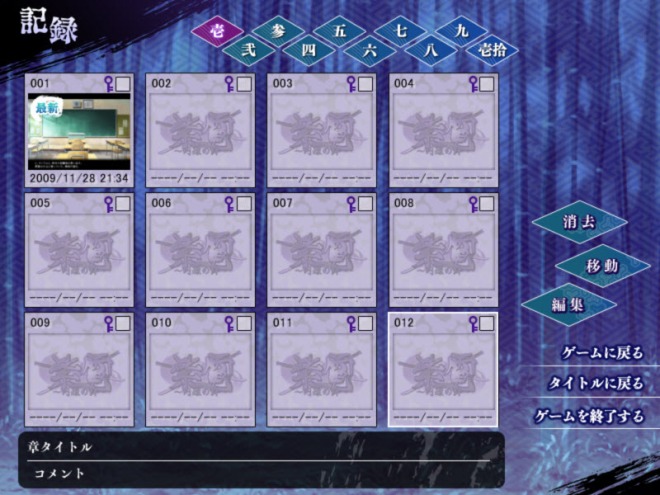 The save/load menu. Nothing too special here. Resembles the save load in G senjou.

Animated transition screen. It’s like a sliding door. Looks nice that’s for sure.

CG for this eroge was pretty damned good actually. Personally I think the backgrounds were excellent, with great shading and quite a high amount of details. Characters however were just pretty decent. Shading was well done with lights and shadows depicted clearly.

There were little or no animation in the eroge save for some move flashes that comes with every fighting eroge.

Fight scene cgs were good though. Even though there wasn’t exactly a lot of variation. But they’re nice.

There are quite a lot of tracks in the eroge. For some reason, the 燃えるtracks weren’t very strong. Rather, there are some with a sort of oriental feel coupled together with a sense of panic. Now that is unique. Overall pretty decent soundtrack. 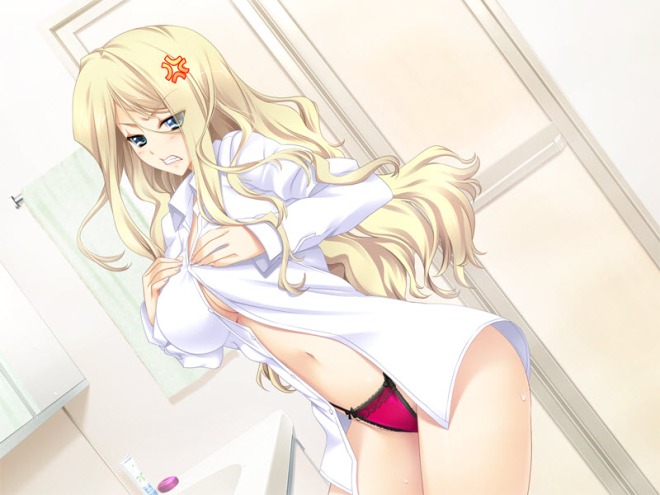 There are quite a few H scenes for each character, 4 for most with 5 for Saku and 3 for Rindou. There are also some rape scenes (not a lot and not on the heroines) which wasn’t always very relevant to the story.

That said, this eroge actually focuses quite some lot on the H scenes. The H scenes were very well done, with pretty different scenarios. Of course, the voice was decently done too.

Somehow, I get the feeling that this eroge was built to be more ero oriented than most akatsuki eroges. 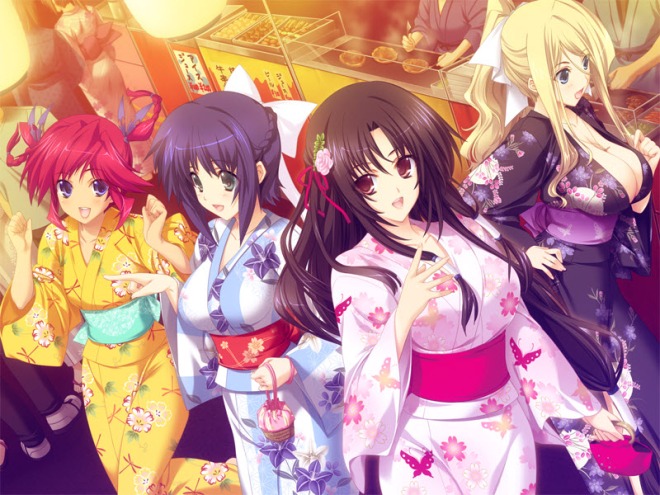 I personally didn’t enjoy Shiden a lot since it’s plot wasn’t the kind I liked nor did I like it’s pacing. However, if you’re a fan of actiony eroges, like big boobs and you like good H scenes. I would pretty much says that this would fit your bill. If anything, it’s not likely to bore you but it’s probably not going to amaze you either.