Now, if they would only make virtual reality the way this eroge showed… 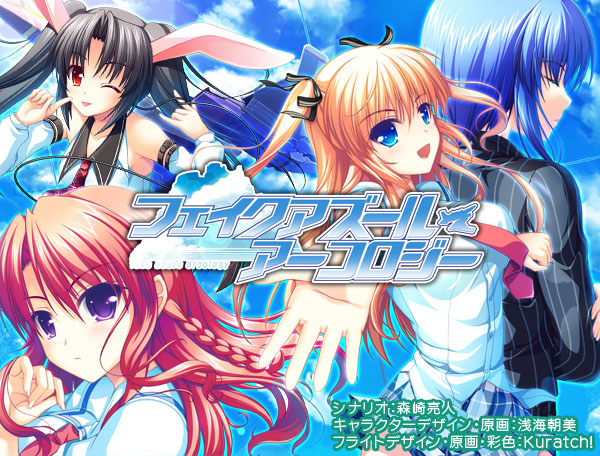 I’ve been lacking scifi themed eroge that doesn’t go along the line of humanoid robots (baldr). This definitely fits the bill of being an actual school life setting in a sci fi world. That and I wish virtual reality could go to these lengths. That would be so fun =D 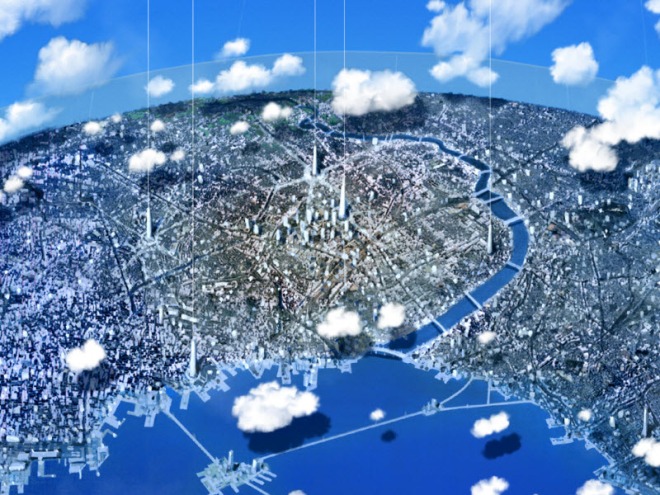 You start off as Chihiro, who’s currently a student living in an Arcology. Amahara Archaeology, a place created with the power of science that caters to the human need for survival, an artificial city. After the meteor shower 500 years ago, Earth is unfit for living and humans live in these enclosed areas called Arcology.

He spends his days the same way, studying and talking to his friends while looking up at the fake sky. Well somewhat normal way.

Well today’s different. Going back home after his part time job, he walked along the usual route. 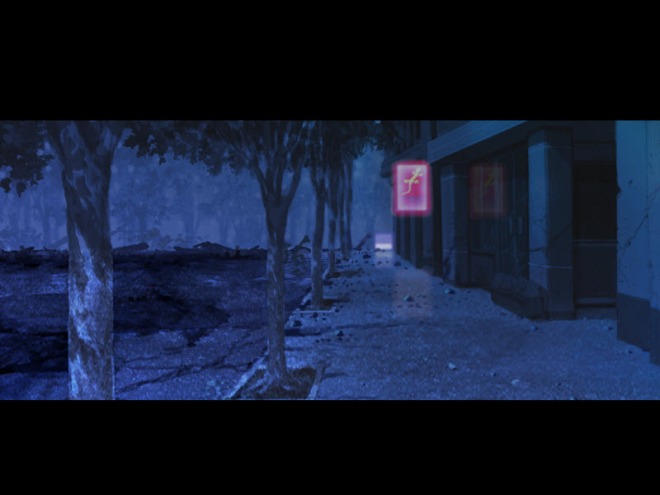 Then, a plane crashed right into the middle of the road. Yep, destroying most of it together with it’s surroundings. Thankfully, he was unhurt. But now comes the question of whether the people in the plane are injured.

He rushes over to the plane and pulls open the door without caring about the heat that burns his hands.

There laid a golden haired girl, which has never been seen before in Amahara. Would this girl’s arrival bring change?

The prologue is somewhat interesting as to imply that change was coming to Amahara where all communications are cut from the outside world. The actual progression of the story is pretty decent, pacing is definitely well done together with a good deal of surprises popping up along the way.

There is also quite an amount of drama. Well in some routes anyway. It’s not the sappy kind but it stands out quite a lot in the story. Not a bad thing though as it was timed correctly.

The eroge has a total of 6 routes with the addition of the true route. Which was surprising as I expected a usual 4 route eroge. What’s more, they went through a pretty decent revealing process through each different route. I suggest moving through Lety’s route near the end as they reveal important points in the story. Noel’s route though, came as a total surprise. A very nice surprise. I really liked it at least since I’ve always had a thing for lonely characters (I wonder why =<)

The story is broken down into chapters, with the story ending at about chapter 13 I believe. Each chapter takes a decent amount of time and I wasn’t including in the side stories which you get to choose during the eroge itself.

All right that said, I feel the stories are too similar to one another. By that I mean they’re too similar in terms of storyline. Sure I mean they have the surprises and all that, but the routes share way too many similar events and processes that just isn’t interesting. Now if there was a little more variation in the actual plot…

There’s still one thing that bugs me though. Why, at the age of science where you could build cities that can provide for itself and create a suitable living environment, do people still use guns. I mean seriously. Wouldn’t lasers be much more appropriate when the planes themselves have laser swords? That’s just weird.

Protag. He has a passion for flying and he’s in love with the sky. He’s the only disciple of Orikura Renji, the champion of flying and hero of Amahara. But because of an accident, he quit flying as he has trauma of flight. Because of that, he now wonders aimlessly as he has lost the only goal in his life. And yes, he’s the kind of kind to every girl but never made a move kinda guy. 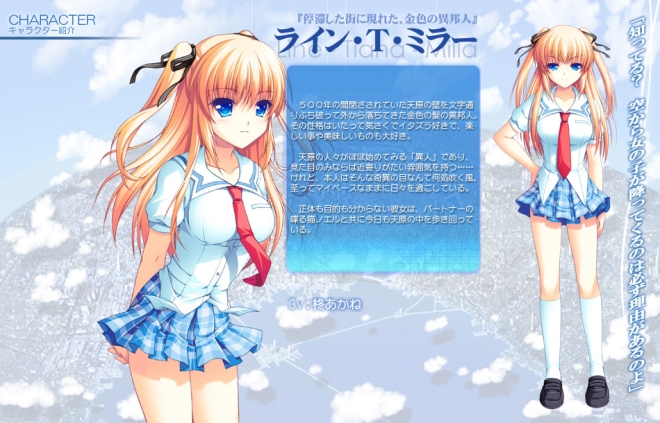 She was the girl who fell from the sky into Amahara after 500 years of isolation. As her hair and complexion is different than the people of Amahara, she attracts much attention. She’s somewhat naughty and my pace. Reasons for her arrival is unknown and she roams around with her talking cat Noel.

She’s also pretty much a genius

She’s Chihiro’s childhood friend and classmate. She’s also great in her studies. She’s Orikura Renji’s only daughter. She together with Chihiro and Akira were always together when they were kids. She always lashes at Chihiro for not studying and tries to push him forward. But she herself is somewhat lacking in other parts, as Chihiro goes over to her place to clean up her room, wake her up and even cook sometimes. Did I mention she has huge boobs?

She was Chihiro’s rival in flight school. They made a promise to settle things in the skies but because of the accident, they lost contact. She continued on even without knowing where Chihiro went, going into competitive flying. She’s more of the cool type character. But, as she only concentrated on flying, there are quite some things she doesn’t know about. Complex about her non existant breasts.

But she’s beautiful in her own way 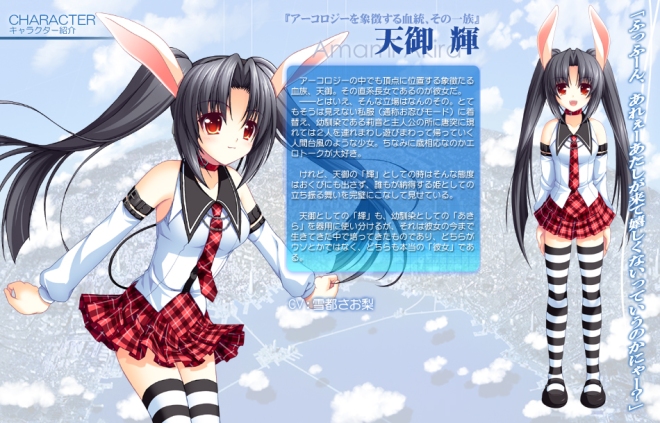 In case you’re wondering why I’m introducing a cat, she isn’t ANY ordinary cat. She’s a cyborg and she talks. She came together with Line to help her with her mission. But mostly as a supporter. She’s pretty much a very my-pace cat too, doing whatever she wants whenever she wants. She has a route, has H scenes and no they aren’t furry. What they are you should find out yourself.

The title screen. Nothing extremely special, does not change over routes. Extras are unlocked after first route completion.

Text box is the usual shape and size too so… The top words show what chapter you’re on. Side stories are stories that can be chosen which I’ll explain below.

This is what you’ll usually get at the end of a chapter. You get to choose side stories before going back to the main plot. Side stories DO affect your main story so take note. Fairly obvious who’s story it’s going to be due to the icon on the bottom right. Sometimes it’s best to just return to the main plot instead of choosing a side story. Well sometimes. 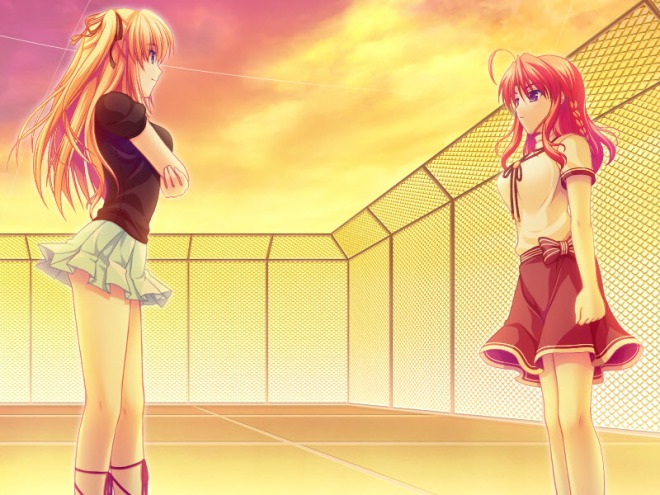 I have a problem with this eroge. Not the style of it, heck no. The style is very acceptable and it’s nowhere near bad. Shading and all were pretty good, though I didn’t like the palette too much due to them saying gold hair is rare but Rio has red hair and Haruko blue?

In any case the main thing I have problems with is where they focused on putting the CGs. Heck, the fight scenes/dog fights were terrible. They lacked the actual action drawings. They were just pictures of planes flying, I MEAN COME ON I’VE SEEN THAT PICTURE FOR THE 10TH TIME. It’s either a lack of funds (maybe, shit happens) but there are some things some places where there really should have been CGs and it just… wasn’t there. That was the only thing that nagged me after finishing the eroge. I felt like closing the eroge after looking at the same plane the 4th time in a scene.

Average eroge type of music. I didn’t find anything worth noticing much. I did realise though, that the track that plays when you start the eroge sounds bad IMO. I mean there’s almost 0 bass and it sounds like some electronic failure. They may have been trying to get the point that this is sci-fi across, but there are other ways to do it. 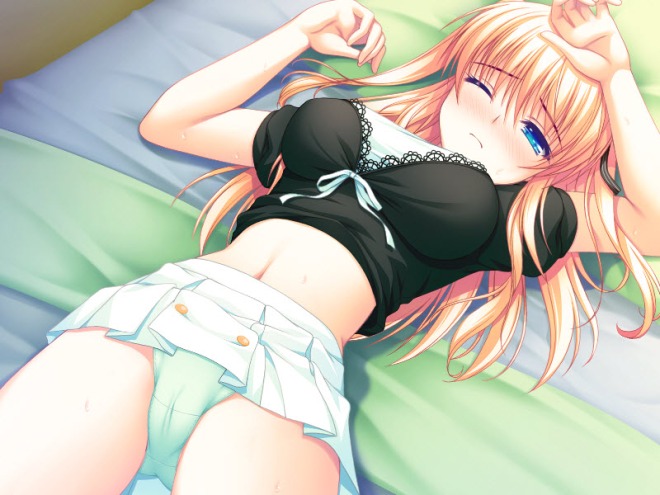 There is a total of 22 H scenes in this eroge. Yes 22. For 5 characters so it’s on the heavier side. H scenes were decent, VAs were alright and there wasn’t really much of a huge problem. I liked the H scenes as some actually brought the story into it, circumstances and whatnot, which made it seem to not be just fucking for the sake of fucking. Noel is freaking awesome. 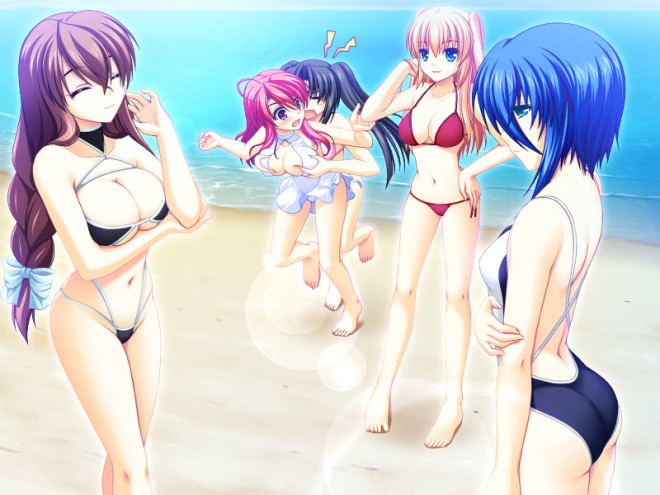 If you’re wondering why I’m raging more than usual on an above average eroge, I’m using this review to de-stress after a whole load of projects. Anyway, on the contrary to all the goddamned depressing things I’ve sprouted throughout the review, this is a very decent eroge to play. It’s probably the better eroges out of the recent ones (ignoring those famous names) and is definitely worth a try at least. I mean sci-fi slice of life isn’t something you get everyday.

What I still don’t get though, is that the company is called applique sister. But there seems to be only one imouto chara in this eroge?