What’s so special = Another eroge which has the protag hiding his gender (lol), another perspective of Hanafubuki, characters that were somewhat left out in Hanafubuki has routes nao!

I wasn’t a huge fan of Hanafubuki, but I was interested in Kachoufuugetsu. As it is a 180 degree different perspective and it’s from the other “power” in the school. Definitely worth it to see both sides of the coin and the story actually makes some sense now. Though the writer I liked wasn’t writing this (日野亘, Comyu and Ruitomo writer). Still has quite some lot of flaws though.

Now this takes place in the same place as in Hanafubuki. But everything else is different.

You start off as Issei, an average guy with a not so average sister. He was supposed to go to a school with a scholarship but due to various reasons, he was forced to enroll into the same school his sister was at, Hanamiya. But wait, it’s an all girls school so… 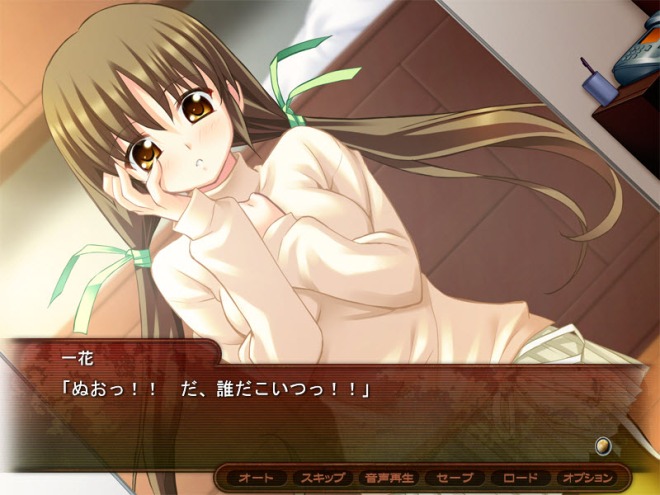 Of course, he could always go in in disguise… So that was really what he did. He transferred, got accepted and goes to Hanamiya, the land of high class girls. Fine.

Unluckily for him (her), he got spotted by another student who had some sort of authority in the school.  As she thought Issei wasn’t acting like a lady, she ordered him to go over to Touen building after class to educate him in the ways of a lady.

Imagining the most frightful of punishments (well not really, more like hilarious), Issei (Ikka for his female name) went over. There he met the four princesses of the school. They’re all in the Hanazonokai, a student council like body in the school.

They discussed about his “misconduct” and then even his sister came over for the discussion. There, his sister rejects the offer of joining Hanazonokai. But then her next line was epic.

She literally pushed their request over to Issei. After much thought (and many objections from Issei), they agreed. Therefore Issei is now part of the Hanazonokai. Can his position get any worse?

The story for Kachou is more or less focused on the characters themselves and the events that spark off a particular event. When I say a particular event, I mean just ONE. Apparently this is considered a full length eroge but it seems to me it’s stepping on the middle line of fandiscs and full length. The amount of content is a bit more than fandiscs but less than full lengths. 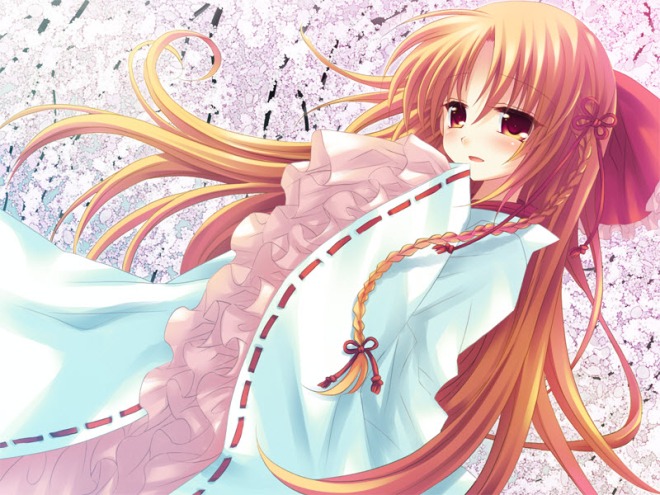 Now in case you’re wondering, yes you have to play Hanafubuki to play this eroge. Why? The references of this story isn’t enough to justify the story. Meaning it’s gonna be hella confusing if you just played this alone since it assumes you have already played Hanafubuki and goes on with that thinking. The protag still has those “dreams” as in Hana except that it’s about someone else this time >_>;

Aside from that, you’ll get to see how the four princesses do their stuff. There wasn’t much coverage in Hana but this time you get to see the story from their point of view. It’s refreshing yes but they kept the story really simple and linear. Most of the routes ended pretty quickly and they weren’t really amazing.

Now about how they set the protagonist. I assume that wearing skirts would probably be possible to cover up his… thing. But it’s nigh impossible in a swimsuit. In the first place those fake breasts would have fallen out. If it was really tight then his thing woulda showed. They probably did it for the kicks, but it doesn’t make much sense logically.

Now there are hilarious parts in the story which makes the whole thing pretty bearable. Once you’re done with the common chunk of story, what’s left is a 3 hour story, at most. Anzu was definitely the focus of this story, having the longest route and probably the most interesting one.

Which brings me to the number of routes in this. There are a total of 7 routes. Yes 7. 4 for each of the princesses and 3 sub character routes. The sub chara routes were more H focused than story focused IMO. If you’ve played Hanafubuki and liked it, I guess Kachoufuugetsu would have a plot that may interest you. If not though, stay away from this since it’s even simpler than Hanafubuki.

Protag. He’s the kind of protag where he’s kind to everyone in the story. Hardworking. A little slow on the uptake. More of an emotional person. 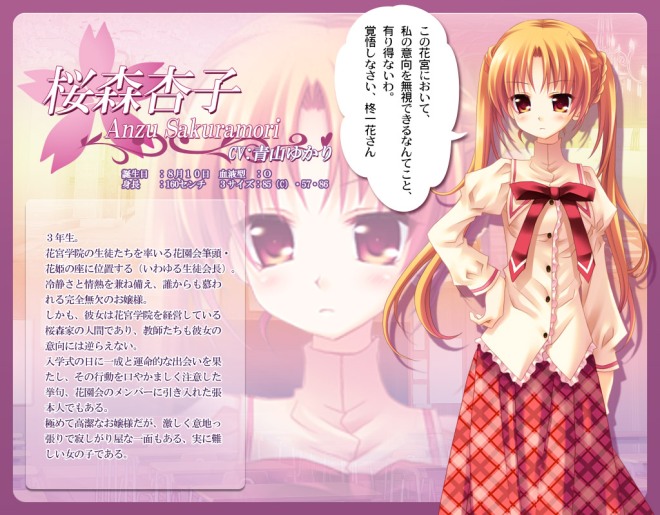 The 3rd year student in the position of Hanahime (Flower princess). As her family is managing the school, she holds considerable power. Calm and collected most of the time, she’s undoubtedly a lady. Even so, she has a more…. childish side. Really obstinate sometimes. 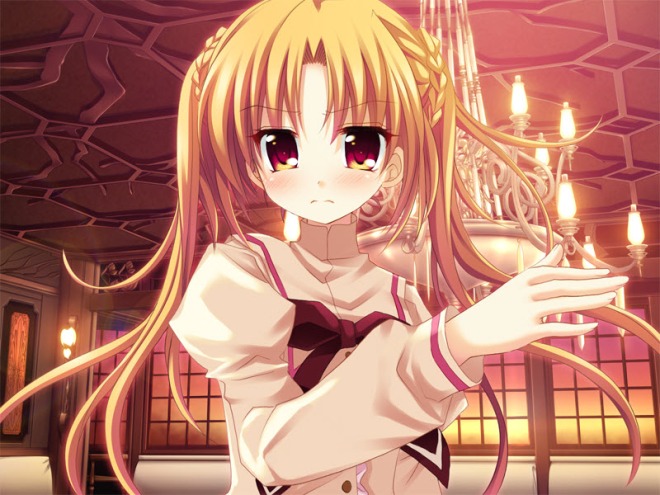 Always strict on herself and others

3rd year student in the position of Torihime (Bird princess). The prince among the princesses. She’s half German. Because of that, her unique looks makes her an idol in school. One of the rare cases that her family isn’t wealthy nor famous. Which isn’t well looked upon by some students. More of a cool and elegant, but somewhat flirty character.  But her true personality is so much cuter \o/. Her dere dere mode kills.

The loli 3rd year. She’s Kazehime (Wind princess). Her family is in charge of the Kirara Group which is, simply said, one of the biggest groups on earth. Childish, bright and sociable. She likes games, anime and the like. There are problems that happen sometimes because of her personality, but it’s always solved as she is hardworking. Her other face is pretty intriguing too.

She still behaves somewhat like a kid though =D

Tsukihime (moon princess) 3rd year. The head of the tea ceremony club. Refined and graceful. One of the oldest families that reach back to aincient times. 100% actual princess. She takes the role of suppressing outbursts from the other 3 and guiding everyone. Her voice is so soft that it almost can’t be heard. She shocks Issei by appearing beside him without a sound. Even though she had no intentions of doing that. But she never speaks about herself much nor what she actually thinks.

A little sickly too

Sumire’s friend and captain of the fencing club. Her family is the decendants of warriors so her skill with the sword is top class. But her personality and actions are more on the irresponsible side. Aside from her jokes though, she has a side where it’s frightfully cold hearted.

1st year. Due to Issei saving her during the ball, she’s totally in love with him. She’s probably the most normal girl in this eroge. Straightforward and hardworking. But she’s also from a pretty rich family, though nothing like those 4. 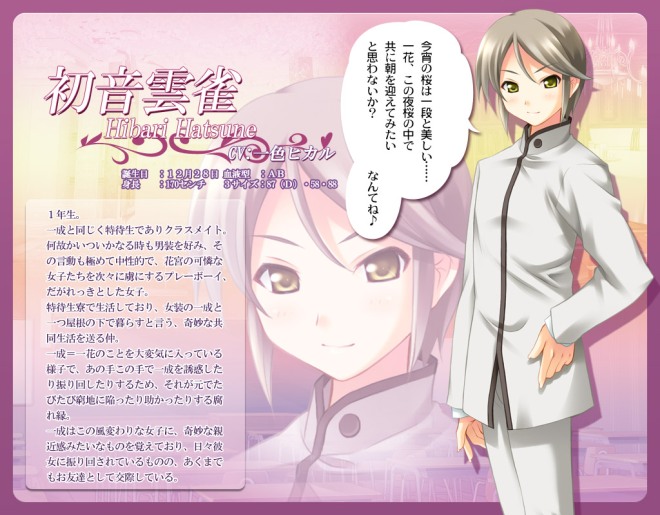 1st year. She’s a girl but for some reason likes wearing guy clothes. She and Issei are the scholarship students in the school and they live in the same dorm. She’s very interested in Issei for some reason and tempts him but he keeps his distance from her and remain as friends. 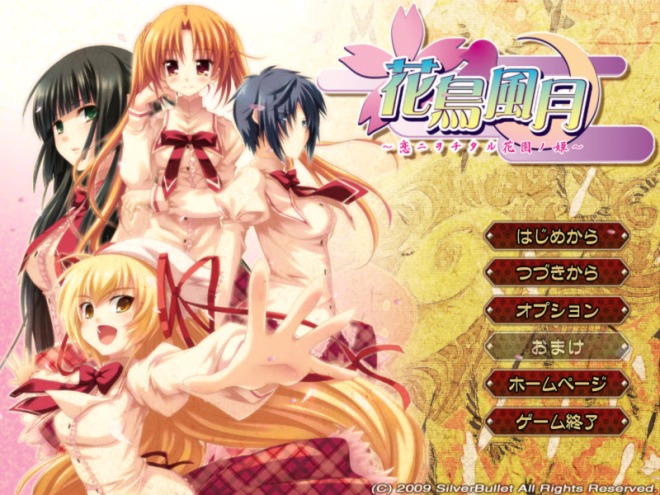 Config. A lot of options from font, font shadow, text color and so on. More than enough options IMO.

Text box is the exact same as Hanafubuki, nothing more to say here.

Though I do think their drawing of leaves improved.

Typical eroge music with a classical touch. Nothing outstanding here. 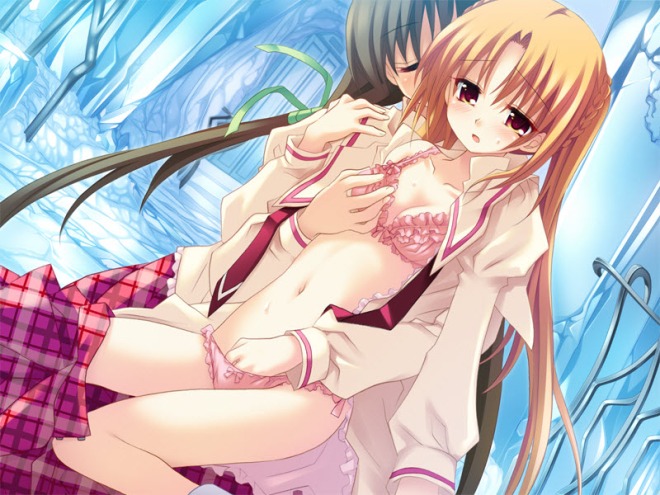 The bottomline of all fandiscs. Always have enough H scenes. Well Kachoufuugetsu sure achieved that, with a grand total of 24 H scenes in the entire eroge. Some of them are mirror images of each others, with the setting the same and only the characters being different. Still that is quite some lot of love going around.

Interestingly enough, I liked this a little more. Maybe because I don’t like lolis as main heroines. Or maybe because I just like Sumire and Sayuri such a lot \o/. Still it isn’t a game you should concentrate too much on.