So the famous (blocking) minori makes another eroge.

Of course, who wouldn’t play it =X

Genre = End of the world drama

Well, needless to say, minori is an excellent company when it comes to producing dramatic eroges. Though I’m still pretty much stuck at the point whether to call this an eroge anymore. It has no choices. It’s more like a movie in the format of visual novels. Hmmm… Tricky.

It’s a pretty hard prologue to write, so I’ll try to describe it a little differently from my usual reviews. 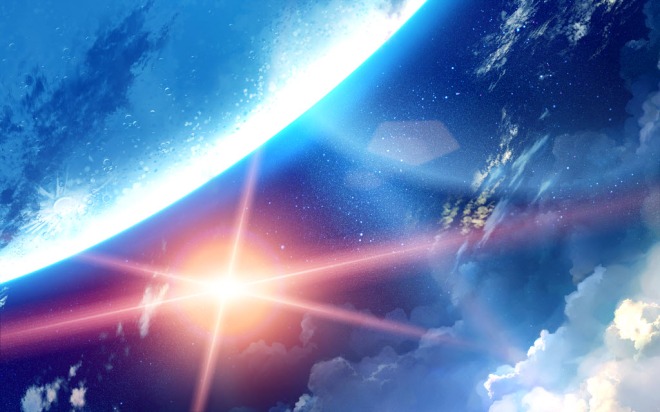 In the near future, the earth faces destruction from a close star (Apparently it affects something from the earth). The human race is already low on population, with the constant wars and bombs.

The earth’s only hope, a artificial girl called “Sion” who has lived for a 100 years, invented a plan to put all remaining humans in a vessel and have them travel to another planet. There, she meets Ryo, a war hardened young man who is sent to protect her as one of her guards.

It is obvious to her that Ryo was different from the rest, with lifeless eyes and monotonous voice.

This meeting between a genius girl who has never seen the outside world and a man, who lives only for one purpose, begins a story of the only two people left on the planet.

Hmmm, this format takes too much out of my brain power. Shouldn’t do this much >_>;

Ok, so lemme get this straightened out to right at the start. This, is a non choice eroge (Much like asairo). It’s also incredibly short (Less than 8 hours for me). If you don’t like these two facts, you can go surf something else now >_>;

The story, is downright dramatic. Not that much so on romance surprisingly, which kinda got to full throttle right at the last moments. But it’s a really good story about the lives and struggles they’re facing/faced. The way the writer writes doesn’t exactly contain a lot of complex words, but it gives you a sense of depth in the story. Very well done. Slice of life bits also exist, though I would b spoiling the story so I’ll just make this a note. 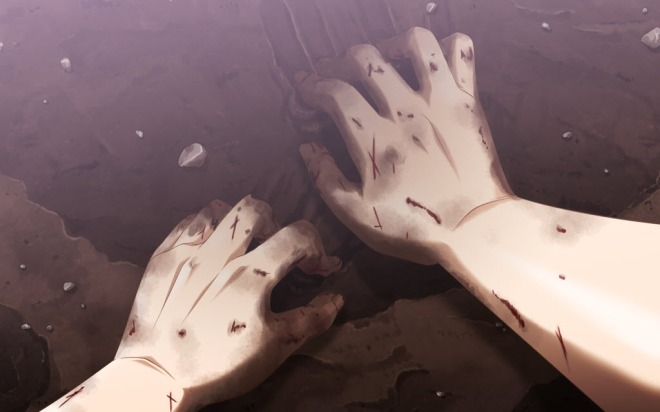 It has quite a lot of flashbacks too, thought given that the story being this short, it’s probably better to actually have them in there.

I’m not very sure whether MOSIAC changed anything in the story, but it doesn’t seem that way. The MOSIAC stories weren’t really special at all so you can forget about it if you want to. 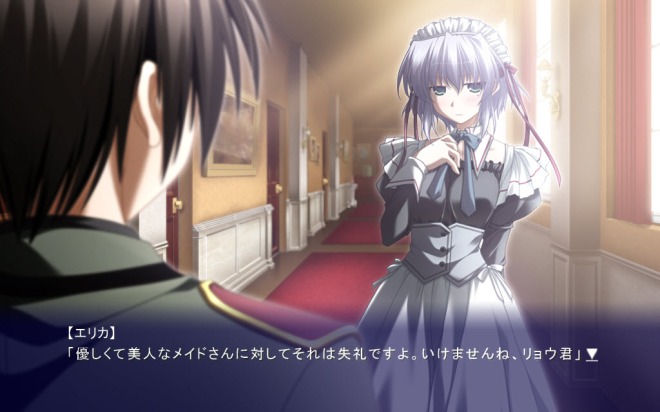 Humor too, is also seen a few times in this eroge, but they didn’t make it much of a point since this isn’t really a funny eroge. A few laughs here and there doesn’t hurt though.

The story is extremely short though, coupled with no choices at all. It’s a straightforward and nice story, but replay value doesn’t really exist. I wouldn’t replay this unless I totally forgot the contents.

All in all, it’s definately worth it to play this eroge for the story. Heck, I don’t think there’s any other way to play it except to like the story. I think the theme is interesting enough for anyone to try it.

There isn’t a lot of characters in this eroge to be honest. But then again, don’t think they need anymore.

Protagonist. Unlike most other protagonist, this one is a genius. In war that is. Guns and melee, he’s good at both. Also in the special forces. He has fought wars and terrorists and won. A little bit on the cold and unspoken side. His senses are also off the charts, being able to know when people are near or stuff like that. Called by his superiors to protect Shion. 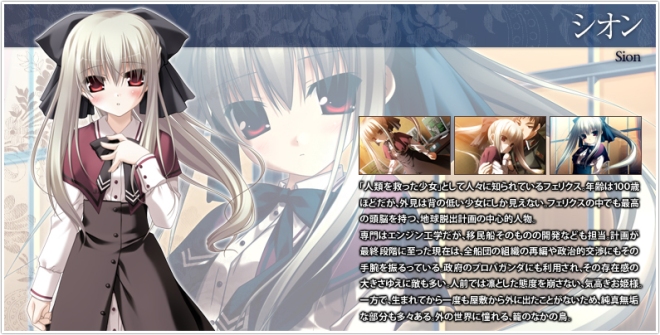 Main heroine. Known to everyone as “the girl who saved mankind”. Current age is over 100. She’s a felix, undying artificial humans with intelligence surpassing normal humans.She’s the cleverest even among the felix and was the one ho designed the vessel for humans to escape into space with. She’s worshipped by a lot of people, but is also considered an enemy by others. Literally a princess in a box, she has never seen the outside world and therefore holds interest in it. Her senses too, because she’s a felix, is extremely sensitive and she seems to actually has a 6th sense. She seems to have been together with Elica for a very long time. 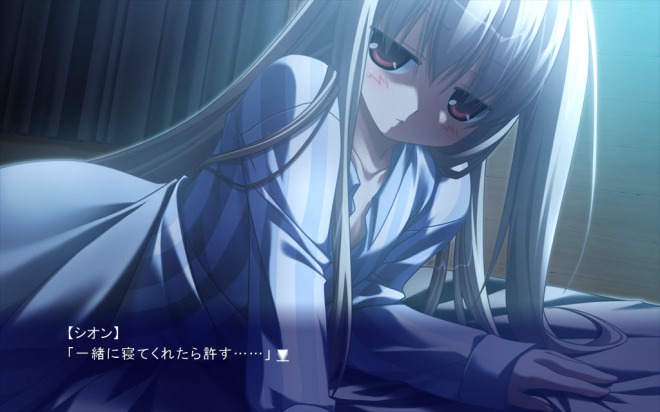 She’s a little cheeky too, though that’s probably because of Elica

She’s the only maid in the facility. Tends to Sion’s needs and is one of the few people Sion actually trusts. Knew Sion for a long long time now. Kinda an oneesan character. She’s cheerful and usually wears a smile on her face. She’s also a felix and has participated in research before. But she doesn’t exactly have special skills. She seems to know Ryo though, even though he doesn’t know her.

She does have some interesting faces though. Coupled with big breasts =X 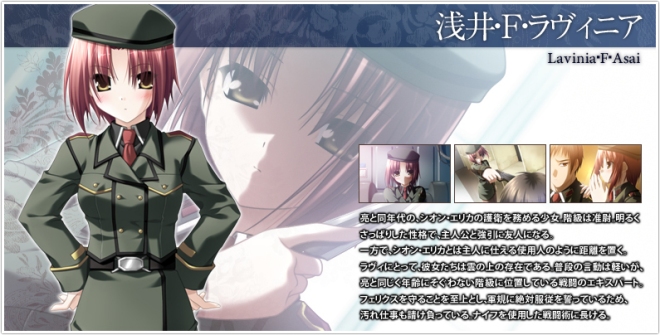 Another soldier with the same mission as Ryo. She has a much more carefree personality. But she has the same rank as Ryo, and therefore is actually a combat expert. Her specialty is close ranged combat. She’s the kind that worships Sion.

But of course she isn’t perfect, her shooting is terrible at least. 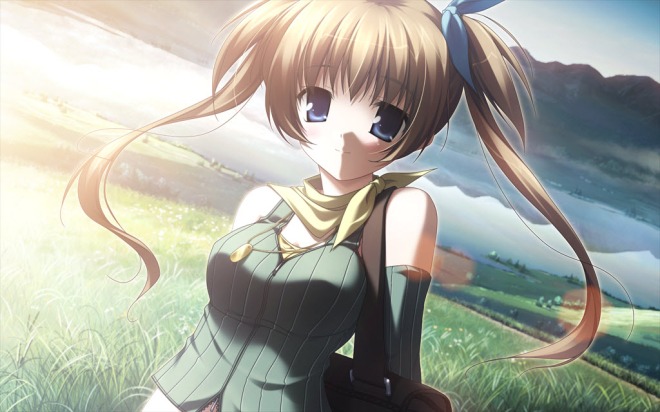 She’s a journalist. Talking too much about her would spoil the story so I’ll keep it simple. She’s a natural airhead, but she lives for what she believes and wants. A truthful girl. Because of her personality though, that Sion likes to play around with her.

Ryo and Lavi’s superior. Extremely slack and all with a casual voice. Even drinks during work hours sometimes. But there is a reason why he’s the superior, he still has the skill and knowledge of a leader. He was the one who called Ryo over. He was also the one to recruit Ryo into the army.

All righty then. Every character in the game is voiced. Nice isn’t it. Even in MOSIAC where it’s all H scenes, the protag is voiced.

Title screen. The BG changes from time to time. Whether it’s reflecting the current computer time or your progress in the story I’m not too sure. But it changes. This is kinda my favorite though =D

Save/load screen. You won’t use this much so it shouldn’t be a big deal.

The text box is clear enough. The bubble pops up when you mouse over to the bottom left hand corner. I really like the depth of field filter they use when the focuses changes between characters. Actually, this is probably one of the best presented eroges I’ve ever seen.

Ok I have two words for this section

No really. The artwork is fantastic in this game. With each background incredibly beautifully illustrated and detailed. Character designs weren’t anything too special but the matching of color with the background is just awestriking.

Also, they did lip syncs for every cg, which just enhances the experience overall. All in all, you can expect the art to be a major attraction while playing this eroge. Unlike most other eroges which has art as a method of portrayal, eden* actually has the art doing some of the talking. It’s just… amazing. Nuff said.

There isn’t any question about this. How could anything 天門 do be bad? EXACTLY.

The music is very melancholic and dramatic. As expected from tenmon. It fits ridiculously well throughout the eroge. And there’s quite a large number of tracks for this short eroge too.

The H scenes only existed in MOSIAC. 4 scenes in total, 1 for each girl. There was a sorta short story for each, but some ended in dreams…….

Anyway it’s pretty good in terms of acting and yes the protag is still voiced. Sion’s H scene made me feel like a lolicon though. Damned. Though I liked Lavi’s more.

You’re not missing too much if you don’t wanna play MOSIAC though. It’s not really a huge addon. 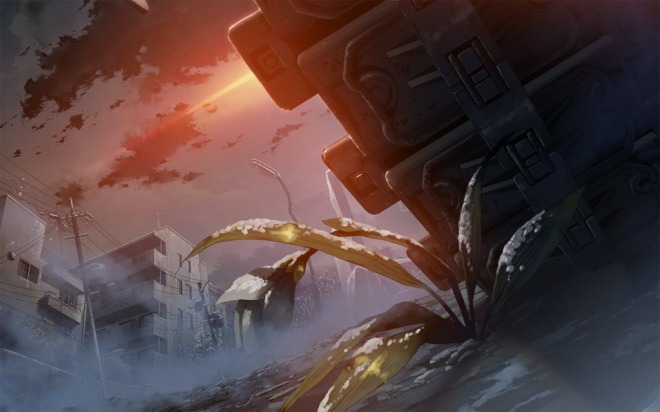 This is definately an eroge worth playing. Though I’m still not very sure whether it’s worth buying since it’s pretty expensive for only 8 hours.

Still, everyone should try this just to see how minori pushed the edges of eroge making and made something that is probably the highest in terms of quality yet.

25 thoughts on “eden* with PLUS+MOSAIC Review”