Ahahahahahaha. That was fast <_<;

I didn’t expect to play this, but I’m pretty glad I did.

I seriously didn’t expect to touch this before someone over at denpa told me it was actually pretty good. Result, he was right. Minus some factors though.

You start off as Taka, a guy who’s just been released out of the hospital due to a serious accident rendering him bedridden for a long time now.

An opportunity was presented to him. The school he used to attend asked if he would be the coach of the track club for a year. Having nothing else to do, he agreed.

He’s going to be the coach of an all girls track club, with only 3 members. One being his childhood friend which he covered and got injured for. Then, he got a request from the principal that the track club should enter the track competition that is going to be held soon. Problem is, there needs to be 5 members at least.

His journey as a coach has just started.

Very short prologue thingy, but I didn’t wanna reveal much since the story content isn’t a lot in the game already.

If I summed up this eroge’s story in one word, it would be evil.

Why evil you ask? Well, the premise was already a pretty cheap shot for drama and the ending. Oh god, that’s like TELLING YOU TO CRY. 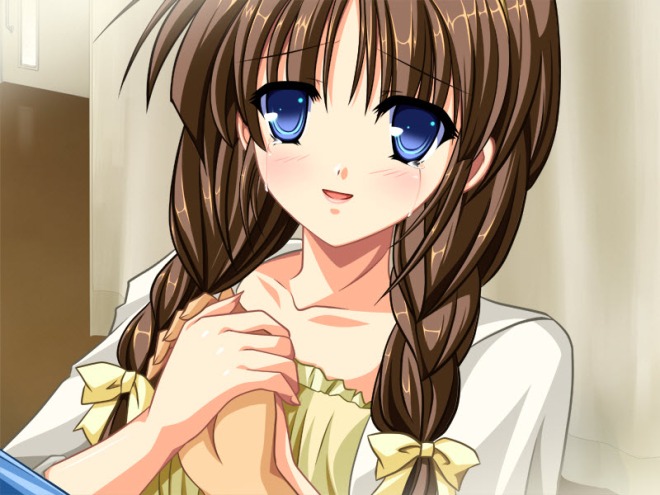 Not exactly a bad thing though, since this is the exact factor that this eroge is good at. I wouldn’t say that it makes you cry throughout like some sappy korean drama, but the ending is definately something that’s really tear jerking. 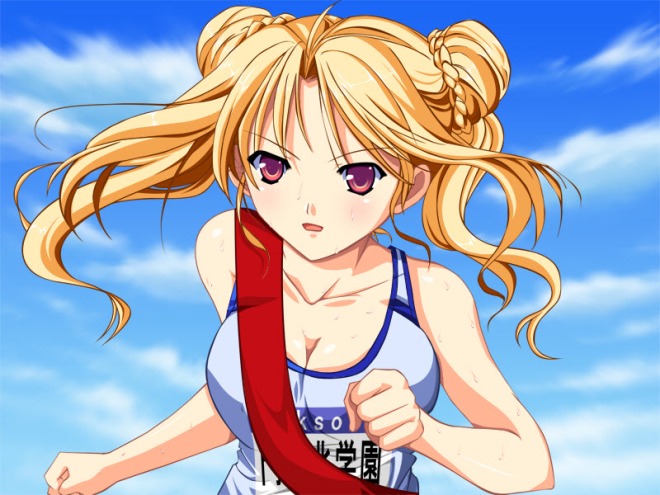 Other than that though, there’s a healthy dose of school life and quite a big chunk about romance too. Not to mention the kind of 燃える soul in the competitions that they enter as a team. Kinda like a team spirit game too.

All in all, I like the story. It’s realistic, different from most of the eroges that came out recently, dramatic and actually has a goal. Of course, this wouldn’t be the cup of tea to many players because it’s SOL, but considering it’s length, it shouldn’t really be much of a problem to give it a try.

Protag. Pretty normal except for the circumstances he’s in. He used to be in the track team but he’s injured now so he can’t run. 鈍感 is definately one of his traits. You could say he is one of those 馬鹿主人公 where they get high when they have a goal. I don’t really think the school would hire a guy to teach in an all girls club all alone though. I mean seriously, he isn’t the old type either. Oh, and I dig the fact he has a face.

She’s Taka’s childhood friend. She’s sorta tsundere cause she never says the truth much and is kinda わがまま. But, it’s pretty easy to guess what she’s actually thinking by throwing her a few questions and looking at her expression. She feels rensponsible for Taka’s injury since he pushed her away.

But of course, there are times when she’s honest. This for instance. 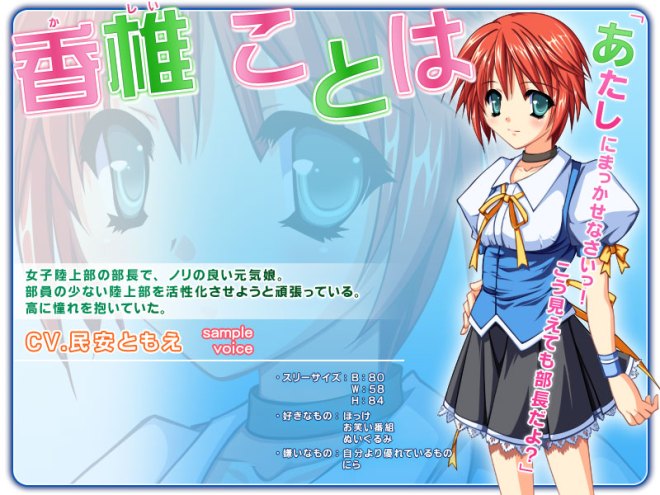 She’s Saki’s classmate and the head of the track club (I kinda know it’s not the track club, but they don’t do anything but run >_>). Olio calls her captain. She’s your typical dumb athletic girl character who runs away from studying but has enough 馬鹿 energy for running around. One of the mood makers in the club. She admires Taka quite a lot, being in the same club as him last time and all, and have seen his results.

She’s probably the most childish among the characters though. Also the flattest, but not completely flat.

The extremely curious exchange student. She adores Japan and knows so much about it that her knowledge probably beats most Japanese. Her speech though, is sometimes laced with english (e.g she refers to herself as me) and is sometimes kinda Katakana instead of Hiragana. Still, she’s really fast at running which is why Taka invited her to join. Really bright and cheerful and always making the mood happy.

Because of that cheerful  and bright personality, it makes her really adorable. Though she’s not my favorite. 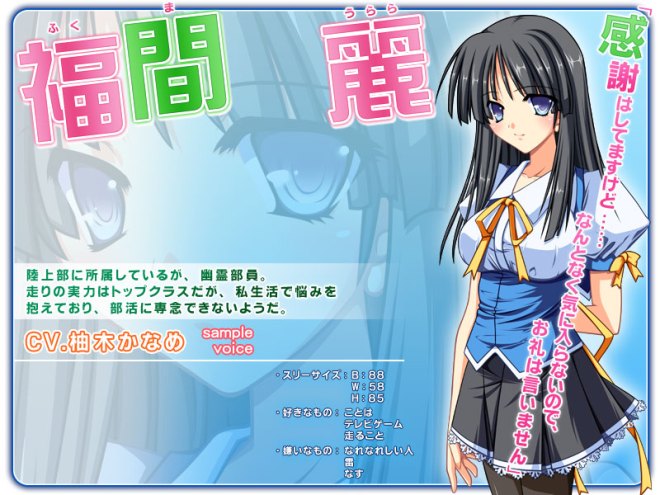 She’s a part of the track club, but can be considered a “ghost member”. She seems to be busy with her studies and is therefore taking a break from the club. She’s an excellent runner though. Quiet type who doesn’t speak her mind, but actually has a pretty cute side. It’s funny how she treats Taka though since he bar- never mind. XD. Oh and she’s my favorite =D 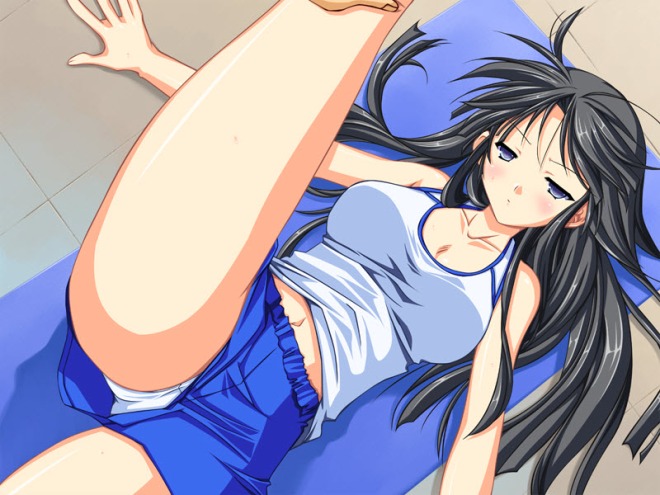 I dunno why I like characters like this most of the time. Maybe cause there’s a challenge…

Please patch your game up first. There are two patches, one being a voice patch for the protagonist and the other some minor problem fixes.

Title screen. Nothing too out of place. Dulled background with a vibrant title standing out.

Config. I have a problem with this config though. Apparently the voice cut when click, which I always activate, was deactivated. When I activated it, nothing changed. Probably a bug, but it’s kinda irritating. I prefer cutting the voices because they interrupt my train of thought while reading something else. 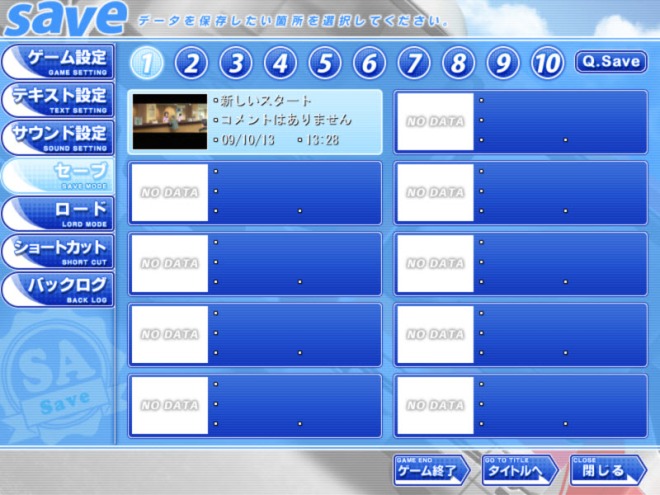 Save/Load screen. Nothing special here so move along.. 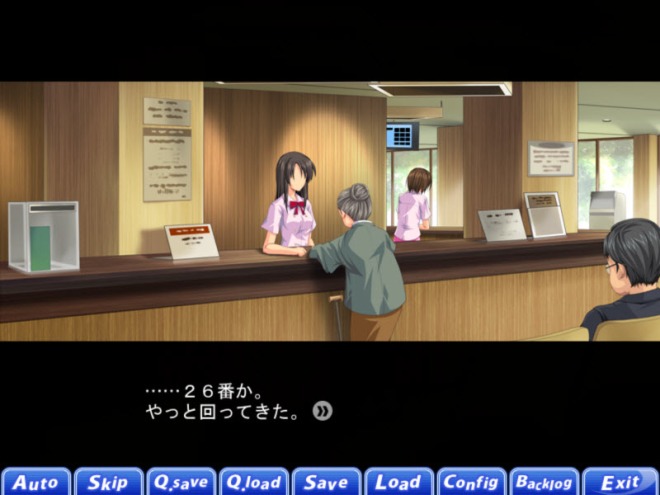 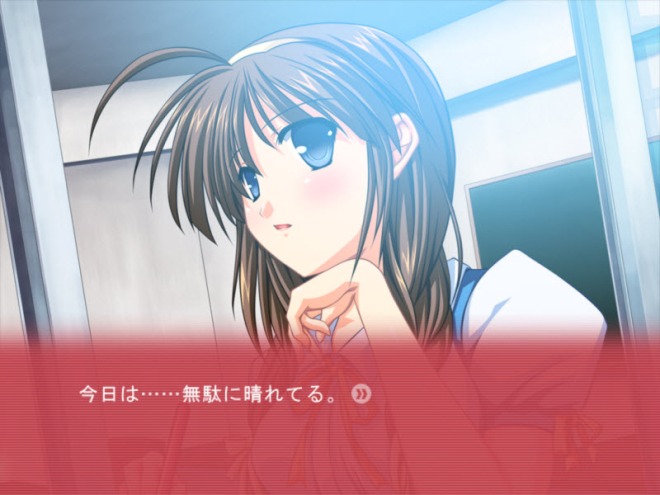 There’s actually one more type, but that appears only twice in the entire eroge and I can’t be bothered to upload =X. The first one is the kind where you get in pretty dramatic moments. A black border on the top and bottom which CANNOT be removed with remove window. The bottom buttons show when you move your mouse close to the bottom. The second type is the standard text box. Problem is you can’t change the transparency which irritated me a little at first. When it’s red, it means it’s from a heroine’s side of view and blue when it’s Taka’s.

Loading screen that only appears right at the start of the game. It’s so cute =D. The characters run through the bar.

In all honesty, I think this art is absolutely terrible. Probably decent for a doujin game but not a commercial one. Pretty sure it was the art that turned you guys off too.

Proportion misses are pretty frequent in the game, character designs are a little awkward and angles are somewhat wrong sometimes. Even so, coloring has no problems, normal characters doesn’t seem to have that much of a problem so I guess that’s only limited to the CGs. They actually did the chibi versions really well so I don’t really understand why the hell the CGs look so goddamned wrong.

Unexpectedly, the music in this eroge is really good. It didn’t just sound like BGM, it sounded like part of the picture which is what most makers fail to achieve, fitting the atmosphere and mood. Also, it has quite a decent tracks for it’s length.

They even went and gave each character an ending song. Which didn’t sound like crap. Awesome. Though I don’t get why you’re forced to listen to it when you beat the eroge since you can’t skip the credits >_>;

There’s a total of 2 H scenes for each character and the grand total for this eroge is 8 H scenes. Nothing too wild or anything. H scenes contain mostly hysteric ah and I’m co- well you get the picture.  Voice acting for everyone was decent except for Urara, who really felt out of place with the voice. I think the VA kinda lost it with her character.

In short, this game is actually pretty good despite the awkward art. It would be a nice change from all the other fantastical eroges that came out. With it’s short length, you can’t really complain that it’ll affect your schedule.