I need androids IRL now. Someone go invent them. 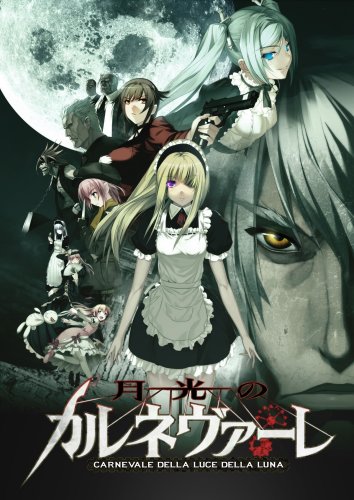 What’s so special = The unique dark Italian theme, the mind blowing art, the solid plot and endings, an all round unique and interesting read.

Oh damned. You know playing eroges like this make me wonder whether the eroge quality is actually improving or dropping through the years. Something so absolutely fantastic just shouldn’t be left behind. 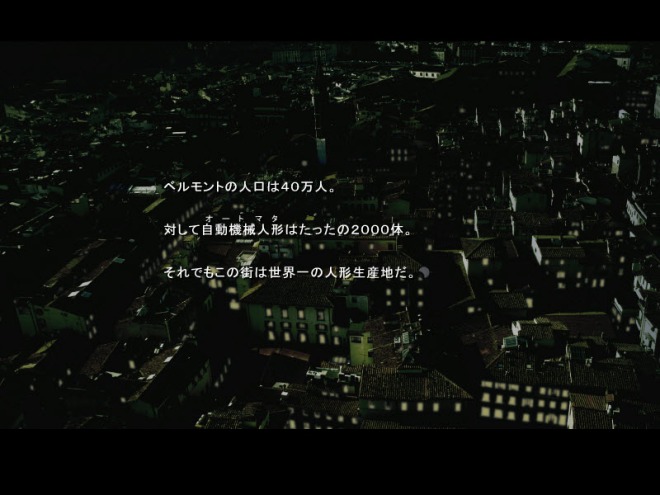 The story is set in Belmonte Calabro in Italy. Belmonte is the city of filled with Automatters and boasts the biggest number of Automatters produced a year.

Automatters are androids. Mechanical beings created from nothing. Most automatters can be easily distinguished from humans due to their robotic faces but there are the antique dolls (I think they were called that), which looks exactly the same as humans with only their eyes giving away who they really are.

You start off as Romeo, a slack taxi driver who absolutely stinks at going around the city with his taxi. Or that’s what he looks like from the outside.

But the truth is, he’s a runaway werewolf from the Oruma Rossa, the only remaining werewolf clan. 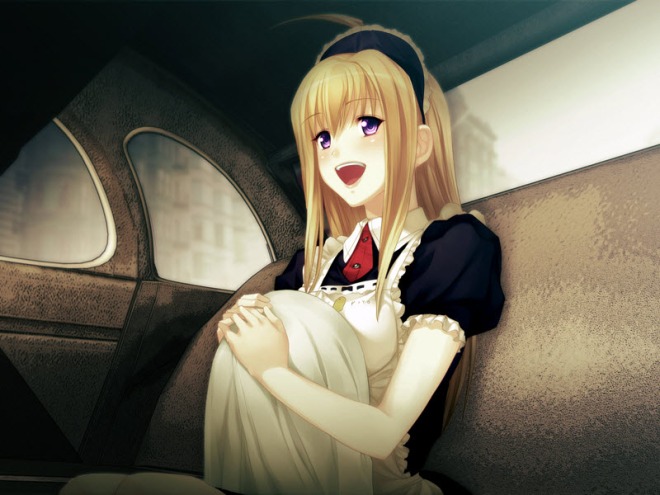 He lives together with Anna, an antique doll he picked up from the dump after he left the Oruma Rossa. She doesn’t have any memory of the past. So she’s living happily with Romeo.

But pleasant times never continue for long. Oruma Rossa do not feel like ignoring Romeo any longer and the Luparia (Anti werewolf force) is moving behind in the shadows. Romeo will find himself surrounded by both new and old foes. This time, their target may not only be him…

So… Gekkou has a very nice setting which brings out the flavor of the plot.  The whole Italian theme coupled with a dark feel is excellent for this plot. Not to mention key scenes are all night scenes, which is just fabulous. 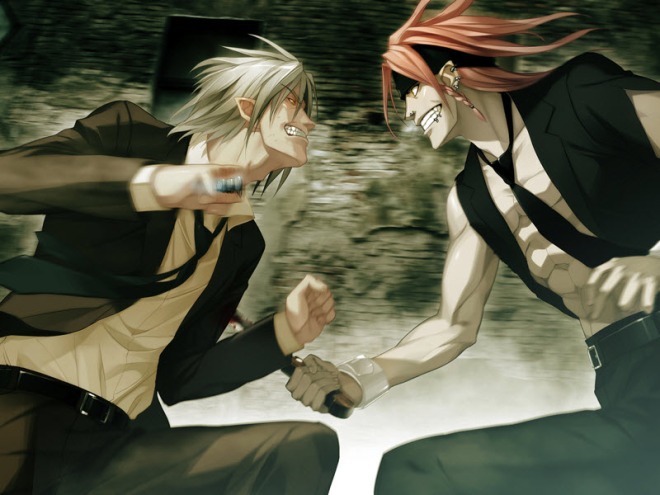 Now this is essentially a fighting eroge. I don’t mean the system, but the focus on fighting is huge. I’ll go to the lengths to say that fighting is what makes this eroge wonderful. It makes up for the otherwise somewhat draggy story.

The thing that stands out in this eroge is the fact that none of the characters are wholly good. Personalities and priorities change throughout the story. Everything can go burst with just one wrong move. Which reminds me, there are quite a lot of trap choices just waiting for you to trip them and lead you to a bad end. 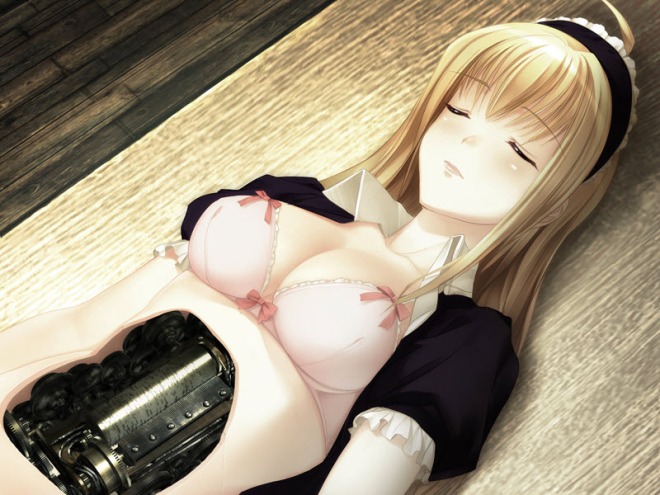 Now, another important point is the fact that they actually incorporated both Androids together with werewolves. I’ve never seen anything like this before, a mix of sci-fi and fantasy to this level. The important thing is that it does not feel out of place. That in itself is an acheivement.

Now I do know some people detest gore, so be warned that there is gore. I personally felt it was weaker than the other eroges since the whole theme was dark and dirty so blood actually fits in the theme more. 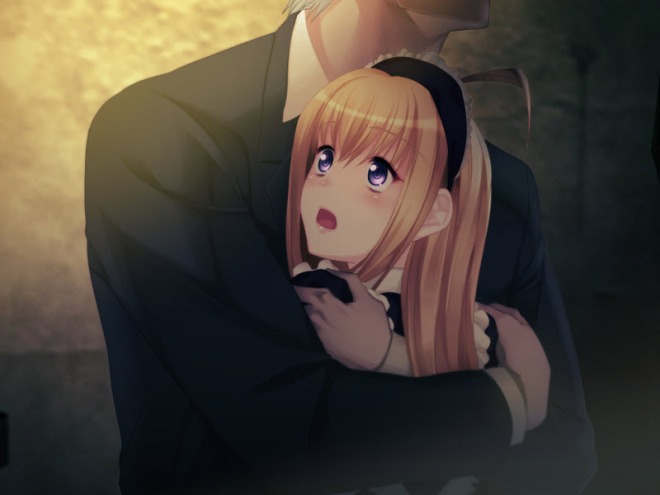 The drama element is very prominent in this. It happens a little more for this eroge and thankfully, it isn’t very sappy. I liked it at least, makes the story much more interesting.

Time wise, it’s not extremely long. It took 20 hours +-. But some commented it got a little draggy at parts. I didn’t feel anything much but it’s best to go in prepared for draggy sections (since I’m not a very good judge at this, I don’t have a good sense of time).

I really think Gekkou no Carnevale has a really unique story that is really worth reading. It’s definitely one of the best that I’ve read before. 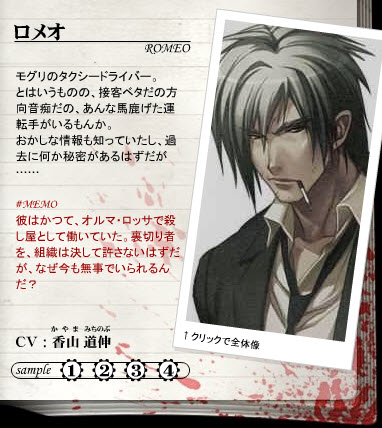 A cool and lax protagonist. Best yet, he actually looks good. He’s an idiot when it comes to locations, never knowing the correct way to go. Knows a lot of stuff that normal people wouldn’t know. Absolutely godly protag.

Anna is an antique doll Romeo found in a trash dump. She had lost all her memories. She works in Germano’s workshop, fixing machines and making orgels. She’s a bright, lively and hilarious character that takes care of Romeo.

The beauty and the beast

An orphan selling drugs for a gang. She acts like a guy, but does have girlish traits. Currently working as a guide working with Romeo. She knows a lot of Belmonte’s history, which makes her an excellent guide.  Stubborn and pretty emotional. Doesn’t agree with Romeo 90% of the time. The only loli heroine, but her grown-up version is just goddamned awesome. 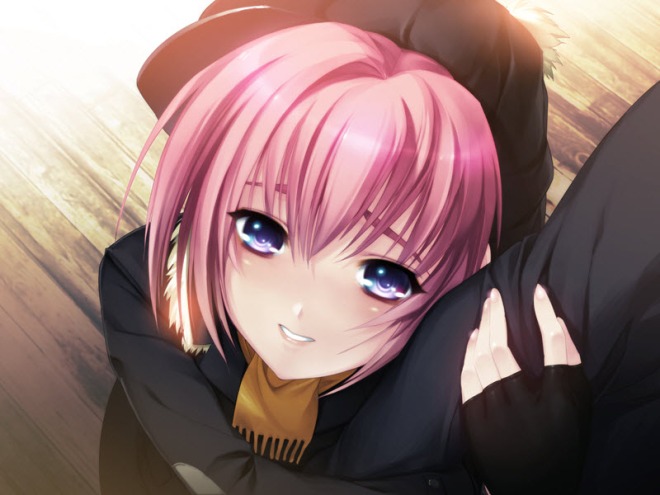 She looks absolutely wonderful in this

Lunaria is an antique doll and works in a circus. Acrobatic and precise tricks are her forte. She also does puppet shows. She hates her master and is jealous of how Anna and Romeo has mutual understanding even though they aren’t bound by anything. If anything, I would say she’s a tsundere. A pretty extreme one too. Anyone thinks that she has an uncanny resemblance of Miku?

She looks better with her hair down IMO 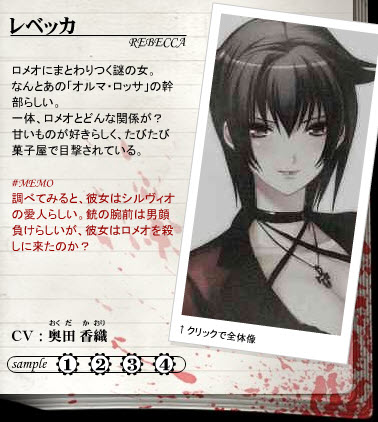 I know she has a sweet tooth, but this is overkill.

Title screen. I really love the backgrounds of this eroge, it’s so well done.

Config. There’s a lot of options so it shouldn’t be a problem getting what you want. 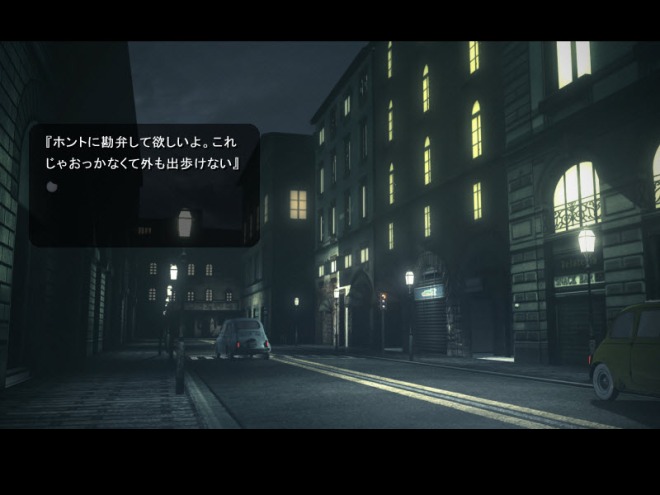 Now the closest example of this text box would be Osadai. The text box moves around as different people talks, going close to the person. General text would usually be showed with the text box at the center bottom. The size too swaps around sometimes. However, it’s much better than Osadai as it’s not animated, meaning the box just appears at the spot as opposed to having the text box moving it’s way there.

There is this other variation where the whole screen is the text box. Text appears in the middle and all that. It’s used for dramatic scenes or recalling scenes. Or 3rd person POV scenes. 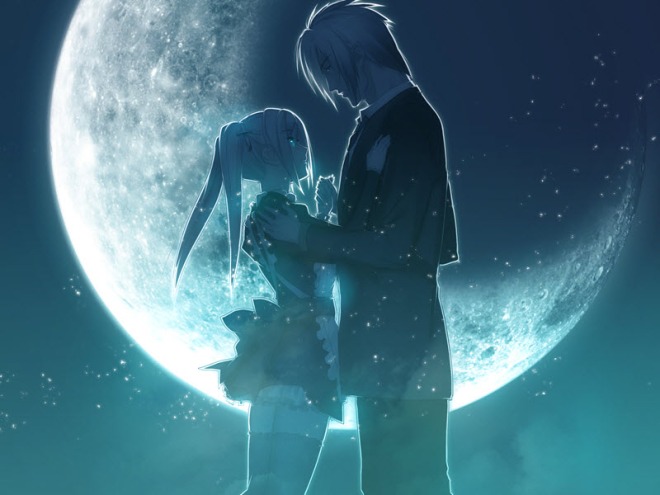 The art is probably one of the most amazing parts in this eroge. It’s nothing short of mindblowing, excellent shading and detail. Washed out colors coupled with darkened areas in the CG really brings out a very nice mood that fits wonderfully with the story.

Another point is the backgrounds. The backgrounds are pictures (I think) that have been edited together and modified to match lighting and so on. This creates a special kind of image, hand drawn characters on edited photos. What’s more, the photos are probably from the place (or at least somewhere resembling it), so the detail is there. I really like this interesting combination that fits well together.

The fight scenes were full of sparks and what not, but again it’s the usual type of slash CG you’ll find in any eroge. Still, there are some action CGs themselves that look really good.

An eroge with this awesome art requires another CG. I present to you, a really cute maid automatter vs crazy werewolf.

The music contains a lot of variation, bells, piano, guitars and so on. They’re all pretty good tracks IMO, fitting into the theme really well and just sounds wonderful. Belmont for example,  stands out in the eroge with it’s catchy tune. Very nicely done. 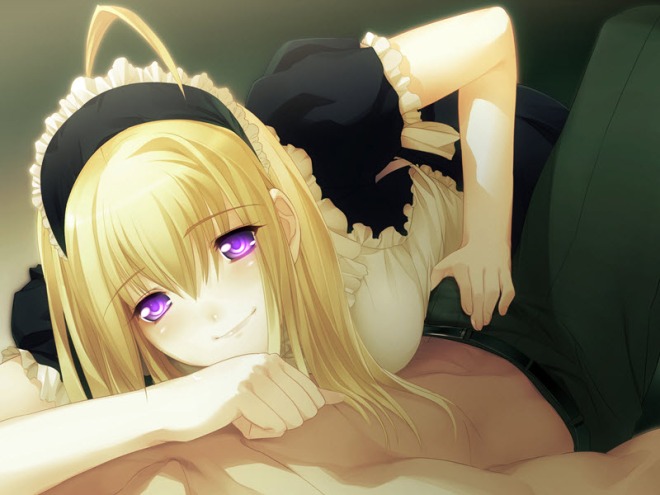 Now I know what you’re thinking. It’s Nitro+, it’s going to be full of maniacal H scenes that’ll leave your head spinning. Well, you’re wrong. There is a total of a 9 H scenes, some which I won’t even consider full length. There is only one actual full length H scene for each heroine. Hey, so Nitro+ can control their desire sometimes.

The H scenes themselves were pretty well scripted and well placed. The timing for them was good and made sense. I liked them, possibly because the protag had a face and didn’t look like an idiot. Worth reading I would say.

Gekkou no Carnevale is an eroge that’s going to be very much worth your time. It’s not way too extreme or whacky like it’s other stuff. Neither is it really long. With a nice plot, unique setting and excellent graphics, it’s definitely a gem among older and current titles.